January 24, 2020
by Priya Jadhav
7 Indian cities feature in the top 20
Chennai and Delhi bag 5th and 6th positions, respectively
Mumbai, January, 2019 – Hyderabad has been assessed as the world’s most dynamic city from amongst 130 cities across the globe. According to the seventh edition of the ‘City Momentum Index’ (CMI) published by JLL today, there are three more Indian cities that made it to the top ten - Bengaluru (2nd), Chennai (5th) and Delhi (6th). Pune, Kolkata and Mumbai made it to the top 20, and stood at the 12th 16th and 20th positions, respectively.
The JLL City Momentum Index identifies a number of key success drivers of the world’s most dynamic cities, including talent attraction and strong innovation economy as well as the challenges these cities face in trying to accommodate rapid growth and maintain positive momentum in the longer term.
This year, Asia Pacific is home to three-fourth of the world’s top 20 cities, which are the most dynamic urban centers in the world. The results show a continued shift in global influence from west to east, with Indian, Chinese and Vietnamese cities dominating the top positions. India – with seven cities in the top 20, the most of any country – leads the 2020 Index, despite slowdown of the nation’s economy.
Ramesh Nair, CEO and Country Head – India, JLL, said, “India’s fastest growing cities have been drawing a significant level of interest from overseas investors. We are starting to see benefits of the government’s reforms on the infrastructure and policy front. Despite a slowing pace of economic growth, these reforms are bringing more market transparency, which boosts investment into real estate”.
“Commercial real estate in south Indian cities is growing at a rapid pace. Hyderabad has seen tremendous growth in 2019 in line with that of Bengaluru. The city has actively embraced technology driven economic growth and attracted large tech giants and e-commerce players. The state government’s focus on business friendly policies and provision of high quality infrastructure along with availability of quality talent pool and superior quality business parks has given Hyderabad a competitive edge.” Nair added.
Jeremy Kelly, Director of Cities Research at JLL, said, “The remarkable dynamism in the emerging Asian economies is proof that economic reforms, business growth and infrastructure investment can drive the expansion of industry, significantly in the tech sector, and facilitate a start-up culture. This is now being repeated the world over, as geographical diversity looks to be returning to the Index.”
Several cities in the top 20 stand out as they transform their urban environments in pursuit of a low-carbon future. In India, Hyderabad is looking at ways to reduce the demand for air conditioning with cool roofs that reflect sunlight and absorb less heat as one of the solutions.
The Index shows the steps that cities can take to overcome some of the issues associated with rapid growth. Continued investment in infrastructure can unlock new locations, reduce congestion and improve air quality. Chinese cities continue to benefit from investment in metro lines, high-speed rail and increased airport capacity. The growth of “micro-mobility” is another positive step, illustrated by Hyderabad’s introduction of smart bikes and rising popularity of electric vehicles. Real estate will form a key part of a city’s overall smart city strategy and its efforts to reduce energy consumption through smart building technologies that drive greater energy efficiency and by creating thriving, inclusive and affordable communities.
“One common ingredient when looking at cities that can successfully adapt to (or successfully transition from rapid-growth to sustainable long-term momentum rapid-growth is the importance placed on governance and leadership – something often overlooked. The complex nature of city transformation relating to the innovation economy, climate mitigation and a changing geopolitical world means a city’s governance system is increasingly critical to a city being ‘future-fit’ for the coming decades,” concluded Kelly.
While Hyderabad and Bengaluru as the top two cities globally for socio-economic momentum, a more active real estate market helped elevate Hyderabad to first position in the overall ranking. Hyderabad recorded the highest office net absorption in 2019 (as a proportion of existing stock) of any city globally, while it is also among the world’s best-performing cities for prime office rental growth.
While all seven major Indian cities feature in this year’s Global Top 20, cities in south India in particular – Hyderabad, Bengaluru and Chennai (5th) – are ahead of their northern peers, supported by favourable demographics and business climates. Their expanding tech industries and start-up cultures make them a magnet for young and ambitious talent from across the country, with Bengaluru having one of the world’s largest concentrations of ‘engine room’ population (20-40 year olds), typically the most dynamic and productive age cohort. 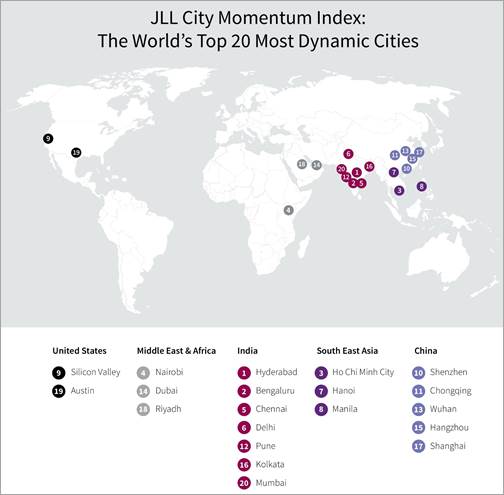 Technical Note:The City Momentum Index presents a weighted overall score for the sub-scores of 18 variables. For each variable the model calculates a score based on the city’s performance relative to the distribution of all 130 city regions, scaled from zero to one. Thus, the top-scoring city for each variable has a value of one, while the lowest-scoring city receives a value of zero. The variables used in the model are summarised in the chart below, combining variables of short-term socioeconomic and commercial real estate momentum.
About JLL; JLL (NYSE: JLL) is a leading professional services firm that specializes in real estate and investment management. Our vision is to reimagine the world of real estate, creating rewarding opportunities and amazing spaces where people can achieve their ambitions. In doing so, we will build a better tomorrow for our clients, our people and our communities. JLL is a Fortune 500 company with annual revenue of $16.3 billion, operations in over 80 countries and a global workforce of more than 93,000 as of September 30, 2019. JLL is the brand name, and a registered trademark, of Jones Lang LaSalle Incorporated. For further information, visit jll.com.