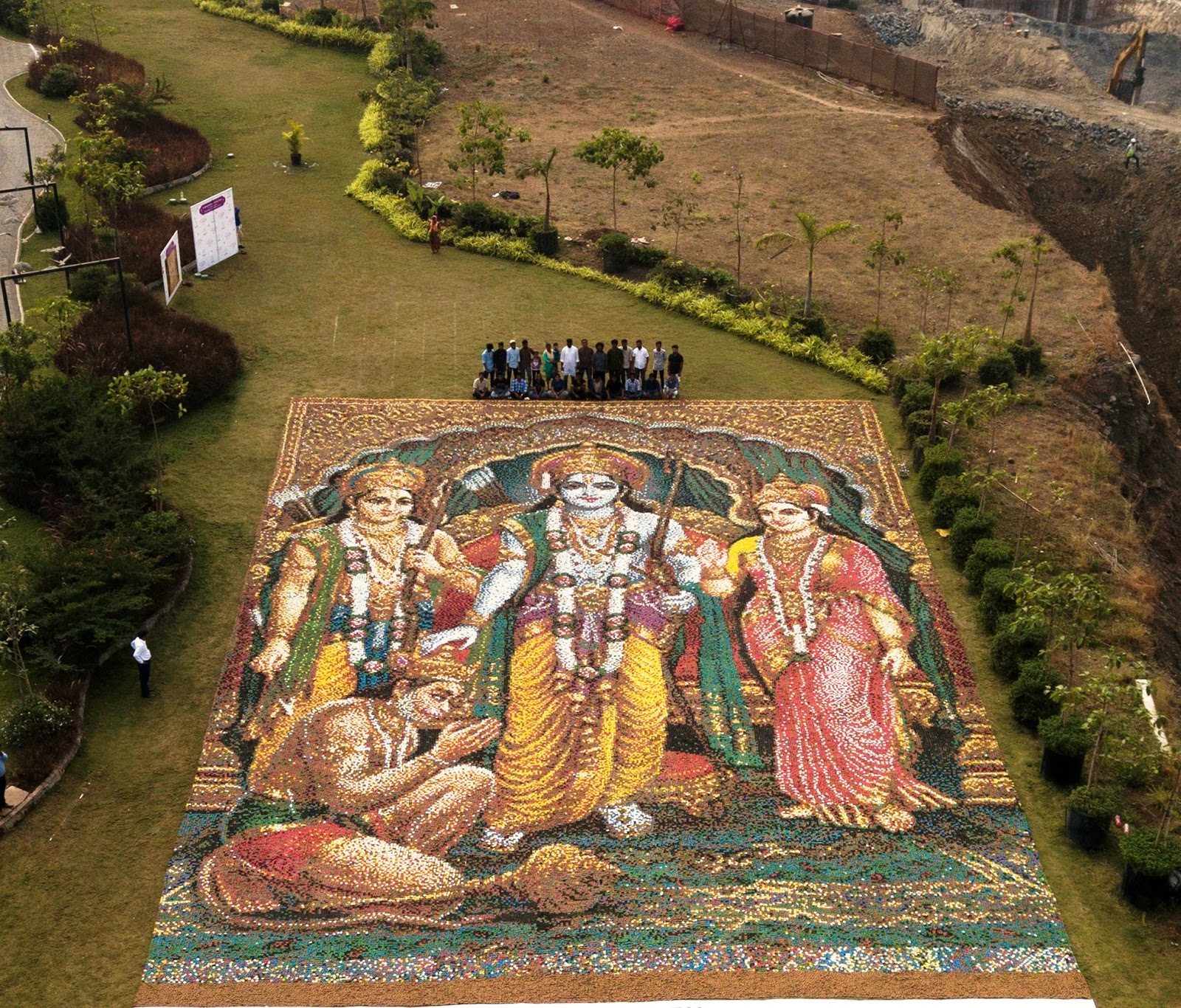 ·       Makes Mosaic Portrait from 2 lakh clay lamps measuring 60 ft x 90 ft (5400 sqft)
·       The creation is his 10th World Record feat
by Priya Jadhav
Mumbai, January 2020: India is enriched with a rich heritage of cultural history that takes us to a tour where we can explore our eminent customs and traditions from the past. Keeping the aura and charisma alive, World Record Holder and renowned Mumbai-based concept artist Chetan Raut has created a largest Ram Darbar at Kanakia Future City in Powai. The mosaic portrait of the Ram Darbar which is made up of 2 lakh clay lamps measuring 60 ft x 90 ft (5400 sqft) will be open for public to view on the 4th & 5th of January 2020.
Speaking about the portrait Chetan Raut said, “The entire Ram Darbar is a symbolic representation of YOU, your own complete self. You have several parts of yourself: the body, the mind, the intelligence and the soul. The first three are easily identifiable by all. The last one, the soul-the divine spark in us- can be easily inferred. It is the soul that keeps the body, mind and intellect functioning and held together. So, when the body, mind and intellect are totally in contact with and surrendered to the soul, and allow the soul to direct their functions, our life becomes a place without any conflict or tension.”
“This is my 10th World Record feat and I thank Kanakia Group for giving me the opportunity to create history and make it a memorable event,” expressing his happiness he further added.
Speaking on the occasion Mr. Bhavik Bhandari – CMO, Kanakia Group said, “On behalf of Kanakia Group, we congratulate Chetan Raut for this remarkable achievement. He is one of the brilliant talents our country possesses and has already won several accolades for his artwork. We wish him the very best for his future endeavours too.” 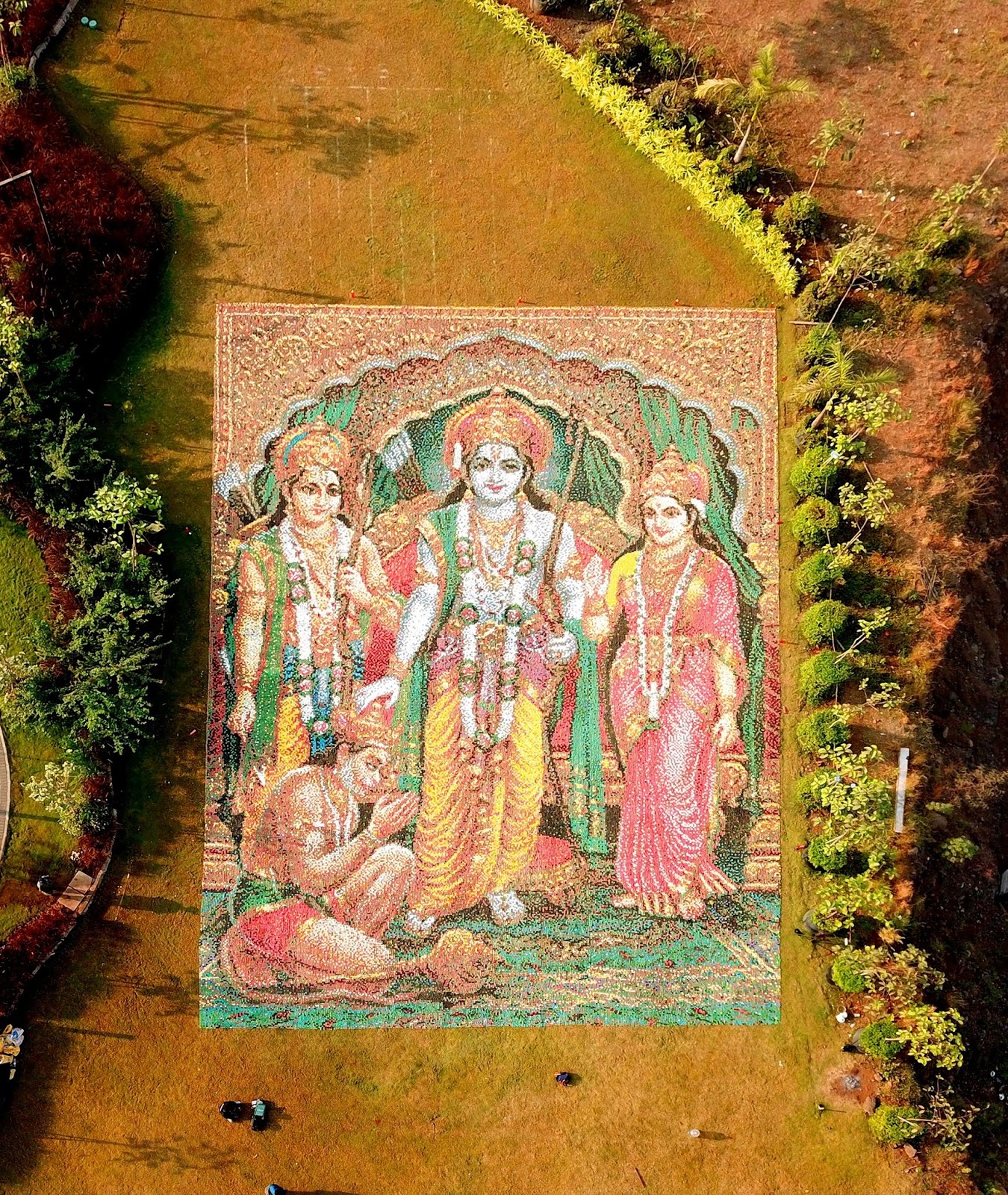 Chetan who is known for creating larger than life artwork with unusual materials have showcased several portraits of well-known personalities, the popular ones being Dr. APJ Abdul Kalam, Prime Minister Narendra Modi, Chhatrapati Shivaji Maharaj, Master Blaster Sachin Tendulkar, former Indian Cricket Captain Mahendra Singh Dhoni, Late Shri Hinduhridaysamrat Balasaheb Thackeray amongst others. Chetan’s previous portraits have been named in Limca Book of Records, India Book of Records & Unique World Records.
About Chetan Raut: Chetan Navasha Raut is a renowned Concept Artist, Background Designer and Visual Developer. Some of his noted Visual Development 3D projects are Motu Patlu (feature Film), Shiva, Guru Bhole, Chingum & Chacha Bhatija (Animated Series).
He holds a degree in Bachelor of Fine Arts in Painting from Sir J.J. School of Arts (2011), Diploma in Art Education (2012) and Master of Fine Arts (2014) from Sir J.J. School of Arts.
To his credit Chetan has won many national and state level awards viz; National Education Summit Exhibition Award 2014 (by Gov. of Gujarat), Camlin Art Foundation Award, Dolly Cursetjee Prize, IIT Bombay, Mood Indigo to name a few.
About Kanakia Group: The Kanakia family has gradually become an inseparable and an essential part of living of many modern citizens. From providing premium housing to education, quality entertainment to promotion of art and culture, Kanakia's have made a holistic contribution to elevate modern lifestyles in suburban Mumbai. Housing projects undertaken by Kanakia, always strike a desired balance between convenient and accessible locations, spacious and well-planned layouts, modern designs and contemporary life standards and recreation for the entire family. Each Kanakia project is a landmark in its own right, sought after for its striking architecture, well planned interiors and lasting construction standards. Each project is the outcome of deep-rooted professional insight and inputs of some of India's leading architects, RCC experts and consultants associated with the projects.