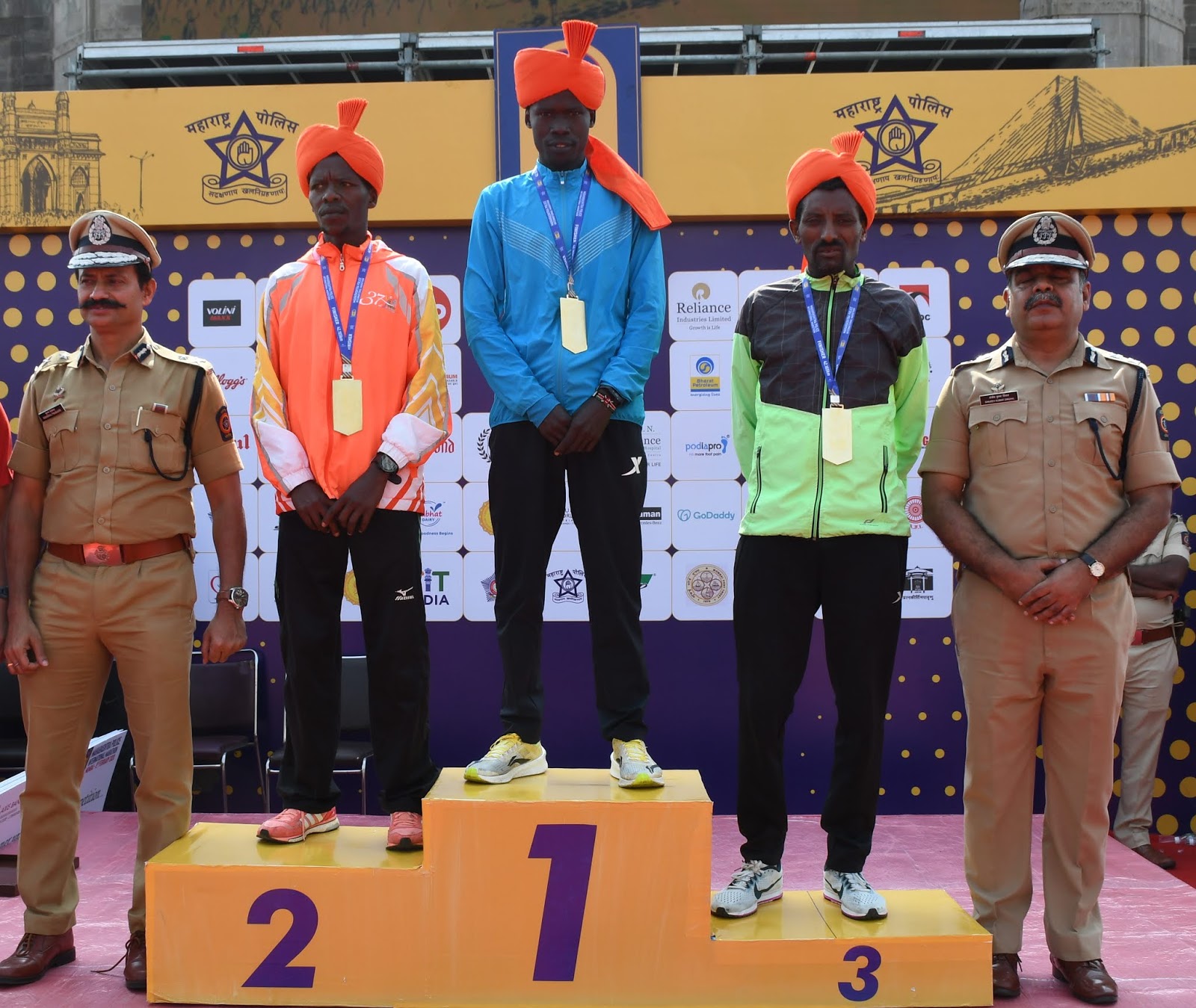 Mumbai, February: Kenyan Stephen Kipchirchir, leading from the start, dominated the international men's elite category and stopped the clock at 2:17.39  to emerge victorious in the inaugural Maharashtra Police International Marathon, flagged off from Gateway of India on Sunday, February 9. This was the 29-year-old Kenyan's second podium from three starts and he took home Rs 3 lakhs for his efforts. The race was attended by Event Ambassadors Ajay Devgn and Akshay Kumar, Tiger Shroff  Director Rohit Shetty, Remo D'Souza and Roop Kumar Rathod, along with Director-General of Police Subodh Kumar Jaiswal, other senior ranking police officials and a host of other personalities. IG (Admin), Krishna Prakash (IPS), the Race Director presided over the proceedings.
Stephen , who has a personal best of 2:11:53, put up an impressive show as he dominated the race finishing a full  2 minutes ahead of his fellow country man Dominic Kangor and Ethiopian Zike Debebe. The International Women's elite race was a close encounter with Kenyan Shyline Jepkorir edging out her countrywoman Gladys Kemboi in the last 50 meters. Jepkorir, running in only her 2nd full marathon clocked 2:41.58 and bettered her previous time of 2:57:00 by 14 minutes.
Armyman Rahul Pal clocked an impressive 2:29:44, to win the Indian elite full marathon for men, narrowly edging out Naveen Hooda by a second, who came home in  02:29:45. Sukhadev Singh came in third with a time of 02:29:53 . Meanwhile, in the Women’s full marathon, Jyoti Gawate ran with blistering pace finishing strong at 02:54:16 to clinch the trophy, much ahead of Shyalmali Singh and Ritu Pal, who finished in 02:59:56 and 03:15:46 respectively. Rahul and Jyoti also took home Rs 3 lakh each. 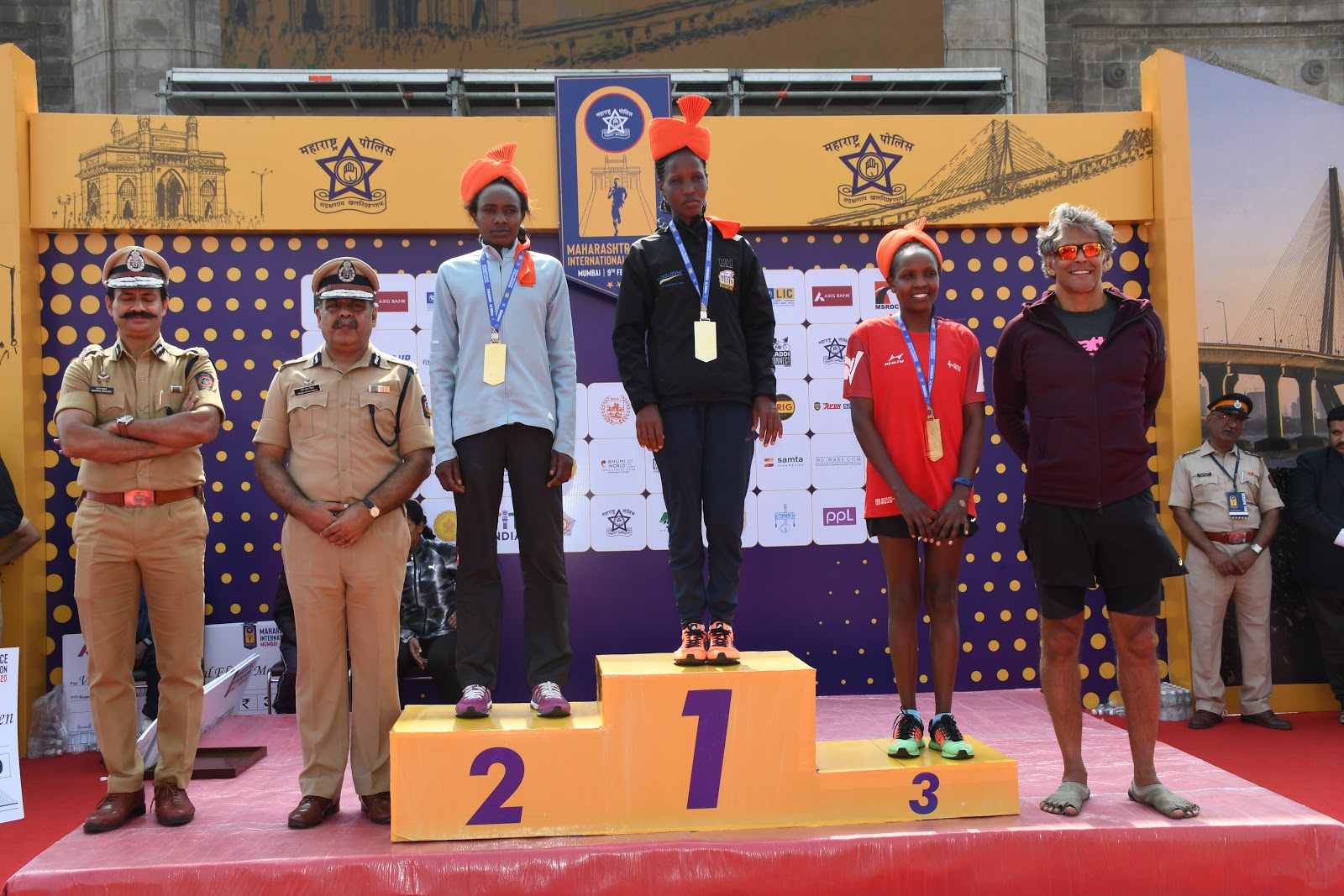 Rahul's younger brother Abhishek Pal made it a family affair when he won the half marathon for the Indian elite in the timing of 01:05:29. Abhishek was followed home by Ranjit Patel and Tirtha Kumar Pun, who clocked 01:05:36 and 01:06:02 respectively. Kavita Yadav won the women’s half marathon in 01:20:01, followed by Kiran Sahdev and Aarti Patil.
Speaking on his victory, Stephen said, “it was neck to neck as we were running in a pack till the 21 km mark. The pack began dwindling as runners slowly started to fade out a post that and I was able to take a lead in the race. Things became worrisome after the 35th km due to the changing weather but I managed to keep my pace up eventually resulting in victory.”
When asked about his victory, Rahul Pal said,  “I am very happy that me and Abhishek both have secured the podium as this was our target going into the race. I was behind in the race for the first 20kms but I backed myself later and pushed hard to get past Sukhadev and eventually kept my lead to secure the podium position.
A total of around 17600 participants took to the streets in the four-race categories, the full marathon, half marathon, 10 miler and the 5 km run while the total prize money for the was 73,46,000.
School Bands entertain: St, Paul's Convent High School, Dadar, Gloria Convent High School, Byculla, Yashodham High School, Goregaon and Dr. Antonio D'Silva High School, Dadar emerged the best school bands from among 20 plus schools that participated in the Marathon Rockers competition at the Expo from Thursday to Friday. The top four bands were picked by Remo D'Souza and Roop Kumar Rathod and were awarded Rs 1 lakh, Rs 50,000, Rs 25,000 and Rs 10,000 respectively. They also got an opportunity to ply their skills at cheer zones along the route in the company of the Police Bands.