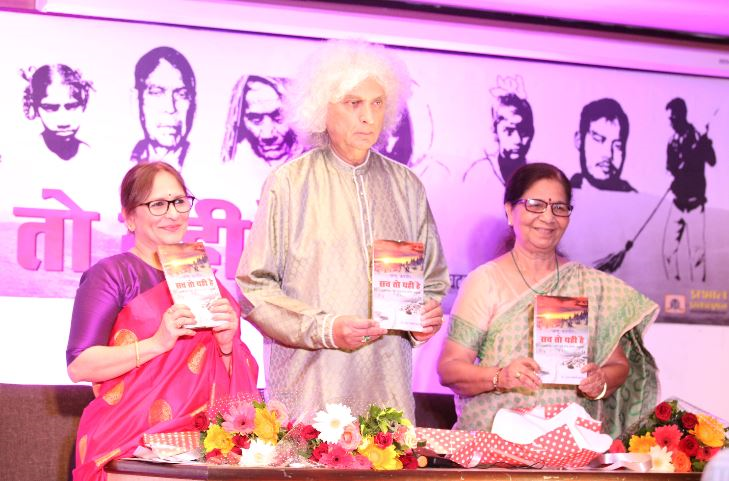 by Priya Jadhav
November 2019, Mumbai; Dr. Asha Naithani Dayama today launched her book 'Jammu-Kashmir- Sach Toh Yahi Hai (Article 35A- Stories based on true events)' at an exclusive event at the Bhavan College in Andheri, Mumbai. The Book was inaugurated by Pandit Shiv Kumar Shama ji and Dr. Suryabalaji along with the Author. Other celebrated personalities like Ustad Taufeeq Qureshi, Punit J Pathak, Sriti Jha, Manasi Parekh, Yashaswini Dayama, Jyothi D Tommar, Karan Sharma, Sanjay Khanduri, Manan Shah, Karan Rathor, Utkarsh Naithani among others.
The Book Jammu- Kashmir – Sach Toh Yahi Hai (Article 35A – Stories based on true events) is based on the story of millions of exploited, Indians, who in the last 71 years of independent India, have been deprived of all the rights and were compelled to live like slaves. The author has made a humble submission that is not history but, her stories focus on that aspect of history of Jammu Kashmir, which has not been covered or written about in the world of literature. Throughout 71 years of Independent India, the governments of J&K, under the guise of law, have ruled like tyrants and inflicted such atrocities on these communities which will shake people to their core. The stories reveal these blatant capricious governmental practices that are practiced in the states of J&K over the last 70 years. 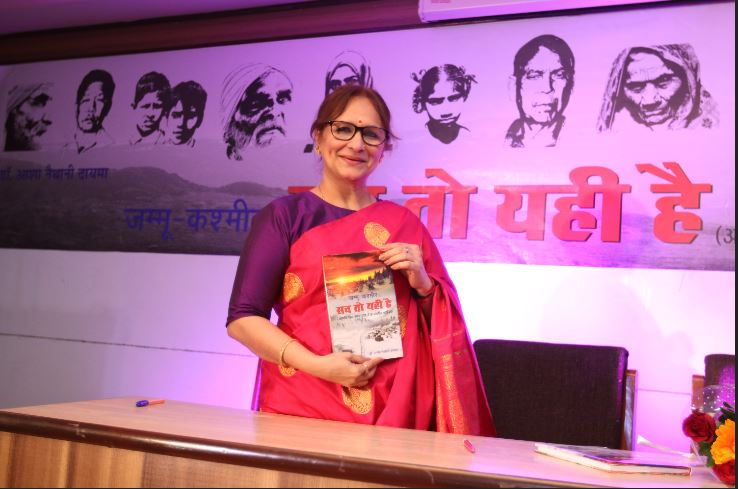 This book is a compilation of 8 short stories. All the stories have been written before the month of February 2019. It is a pleasant coincidence that by the time this book was published, Articles 370 and 35A have been abolished by the Indian government. Unfortunately, it will be years before any ground level justice prevails.
First category is of West Pakistani Refugees, during the 1947 partition, those, who came and settled in Jammu and Kashmir were never given their rights and even after 70 years of partition were called West Pakistan Refugees. It is ironical that the Indian Government acknowledges them as citizens of India but their own state of Jammu and Kashmir refused to acknowledge them as permanent residents and denied the Permanent Resident Certificate- PRC. Their last four generations have been damned to live their lives in drudgery.
The second community is the Valmiki community. In the year 1957, when the sanitation workers of J&K went on strike, the state government invited families of the Valmiki Dalit community from Punjab to work as sweeper but did not acknowledge them as permanent residents and refused to give them a PRC. It is astonishing that despite the community's third generation being well educated and employable in formal jobs, the state government refused to give them basic rights and jobs. The state had most unique law, where the members of the Valmiki community could only be employed as sanitation workers and by law, could hold no other employment.
The third category is that of the Jammu-Kashmir Gorkha community. This community has been residing in the state since 1816-17. The Gorkhas have shed their blood and made great sacrifices for the security and wellbeing of the state. But the state government refused to acknowledge them as permanent residents and kept them deprived of all the rights for 70 years.
Fourth category is of the Women of J&K. The women, who belong to the aforementioned communities had no rights in the state on the pretext of PRC, that is obvious, but what is more shocking is the fact that the government of J&K denied rights to even those women who had a PRC. As per the laws implemented in J&K, the term “Valid till Marriage” was written on all the women’s PRC. Irrespective whether Hindu, Muslim, Buddhist, Sikh etc, if a woman with PRC married a person, who is from another state in India or someone who lived in J&K but did not hold a PRC, then she, would also be considered to be a non PRC holder and had to forgo all her rights, including right to property. Even her children would not be entitled to any rights in J&K. In the year 2002, the High Court of J&K ordered to abolish the practice of writing "Valid till marriage" on the PRC of the females. However, the malpractice continued despite the ruling. In 2005 after being reprimanded by the High Court, this was finally done away with. Despite that, thousands of women and children of the state remained deprived of their rights.
After the abolition of articles 370 and 35A, there is a new ray of hope among the people of these communities in J&K.
About Jammu- Kashmir – Sach Toh Yahi Hai: The stories of 'Sach Toh Yahi Hai' are based on true life incidents of people from the aforementioned communities and hence, the characters and their plight, feel alive and real. The author herself frequented J&K and has a continuing relationship with the people of these communities. The author has presented their stories with a lot of sensitivity and the stories have a dimension of reality that touches the readers. The pain, helplessness, despair and frustration of the characters foments the reader. This book brings to life the unheard voices of Jammu and Kashmir and unravels the ruthless truth of an untouched aspect of this state.