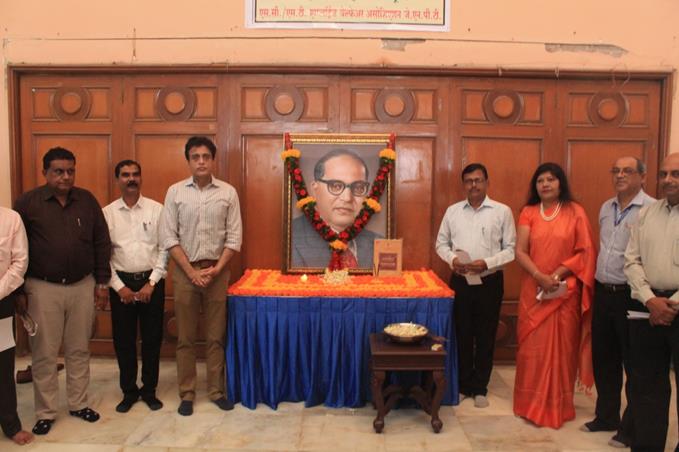 by Priya jadhav
Shri Sanjay Sethi, IAS, Chairman, JNPT along with Head
of Departments on the Constitution Day celebration at
JNPT
Mumbai, November, 2019: Jawaharlal Nehru Port Trust (JNPT), India’s premier container port celebrated Samvidhan Divas to commemorate the adoption of Constitution of India on Tuesday, November 26, 2019 with great enthusiasm and participation of all the officials and staff of JNPT.
The Preamble of the Constitution of India was read out by Shri Sanjay Sethi, IAS, Chairman, JNPT in the presence of Head of Departments, officers and staff of JNPT.
“On this day, we celebrate the spirit of freedom and democracy of this great country. Today we pay our homage to the father of Indian constitution, Dr. Babasaheb Ambedkar for capturing the true spirit to make India a Sovereign, Secular, Socialist, Democratic and Republic Nation. The right to life and the freedom of speech empower citizens to lead a life according to their choice. JNPT is proud of its contribution to the nation and of upholding the constitutional values,” said Shri Sethi.
It was on November 26, 1949 that the Constituent Assembly of India formally adopted the Constitution of India, which subsequently came into effect on January 26, 1950. Accordingly, November 26 is celebrated as the country’s Constitution Day every year to value and preserve the rich heritage and the composite culture of India.  This year, JNPT will be holding year-long activities highlighting citizens' duties through talks, rallies and other activities as part of the awareness campaign.
About JNPT:The Jawaharlal Nehru Port Trust (JNPT) at Navi Mumbai is the biggest container handling Port in India accounting for around 52% of the total containerised cargo volume, across the major ports of India. Commissioned on 26th May 1989, in less than three decades of its operations, JNPT has transformed from a bulk-cargo terminal to become the premier container port in the country. Ranked 28th among the top 100 Container Ports in the world, JNPT is connected to over 200 ports in the world.
Currently JNPT operates five container terminals: the Jawaharlal Nehru Port Container Terminal (JNPCT), the Nhava Sheva International Container Terminal (NSICT), the Gateway Terminals India Pvt. Ltd. (GTIPL), Nhava Sheva International Gateway Terminal(NSIGT) and the newly commissioned Bharat Mumbai Container Terminals Private Limited (BMCTPL). The Port also has a Shallow Water Berth for general cargo and another Liquid Cargo Terminal which is managed by BPCL-IOCL consortium.