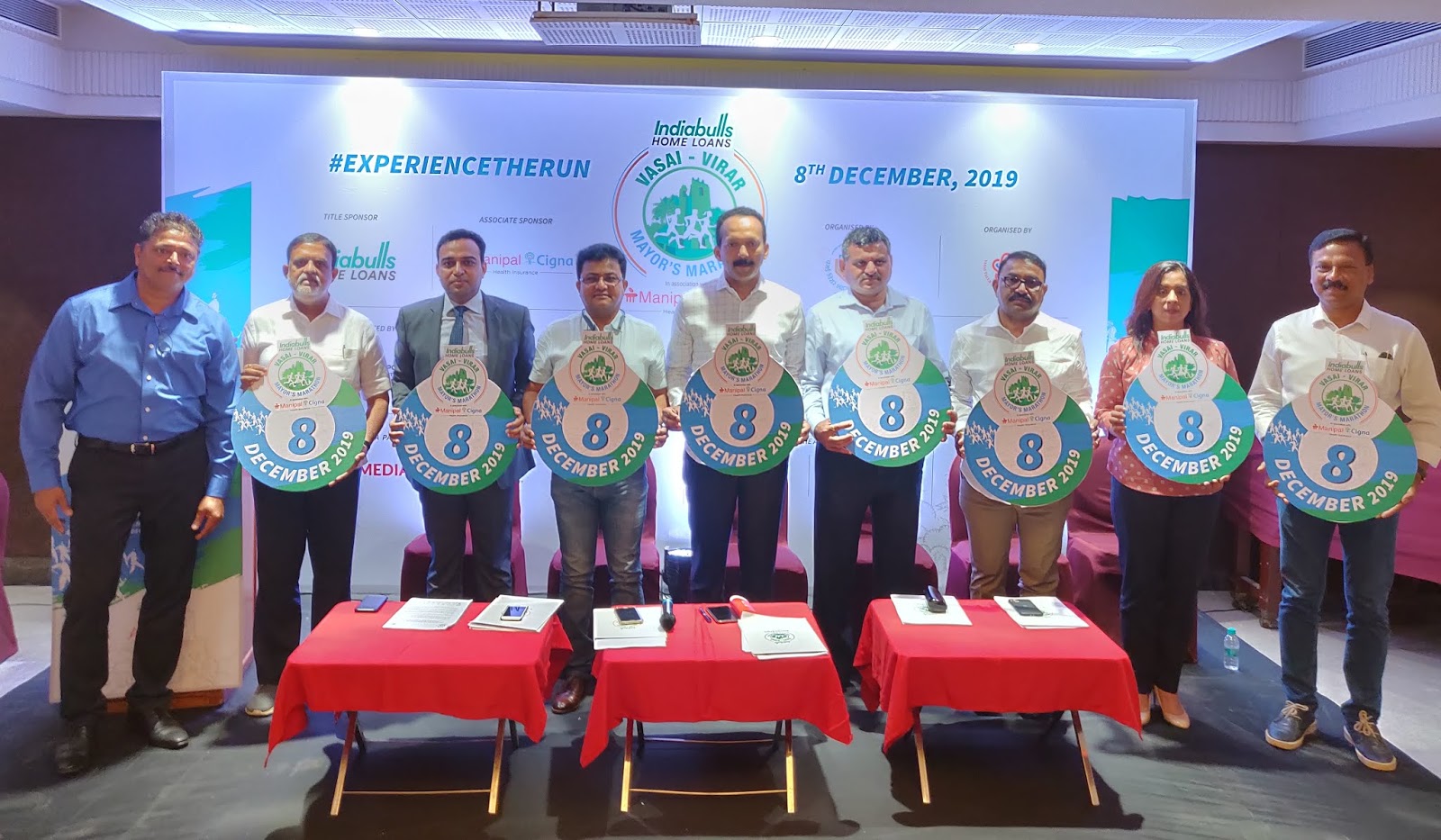 by Priya Jadhav
Asian Marathon Champion Gopi T to be Guest of Honour
Mumbai, November, 2019: A strong elite athlete field with 30 runners, increased participation in the timed events, a new race category for families and the presence of Asian Marathon Champion Gopi T as the guest of honour were announced by Shri Pravin Shetty, the Honourable Mayor of the Vasai Virar City Municipal Corporation, for the 9thIndiabulls Home Loans Vasai Virar Marathon, in association with Manipal Cigna Health Insurance, to be flagged off from different locations, in Vasai and Virar on Sunday, December 8, 2019.
Joining the country’s leading distance runners at the marathon, around 18000 plus participants are expected to take part. Among them are 900 Full Marathoners, 3900 Half Marathoners, 3400 plus 11 km Runners, 1050 athletes in the 5K timed category including 200 in the Manipal Cigna Family Run and over 2000 in the Dhamaal Dhaav. In the junior age group categories around 7000 plus athletes are expected to run for 1.5 kms, 3 kms, 5 kms, 7 kms and 11 kms. The Battle Run, an exclusive event for 3-member teams over the 11 km distance has drawn 30 team entries.
IBVVMM is the only national-level running event in the country which is organized by a Municipal Corporation and offers the highest prize money of Rs 4 lakhs for Indian athletes. The winner of the Full Marathon for men stands to gain an award of Rs 2.50 lakh, while the male and female winners of the Half Marathon will take home Rs 1.25 lakh each.
Asian Marathon Champion and Olympian Gopi T, the first and only Indian athlete to win gold in the Asian Marathon Championship has been invited as a special guest.
Mayor Shri Pravin Shetty said, “on behalf of the Vasai Virar City Municipal Corporation, it gives me great pleasure to announce complete preparedness to host another successful edition of the Indiabulls Home Loans Vasai Virar Mayor’s Marathon on December 8, 2019. The entire machinery of the corporation, in association with the Vasai Taluka Kala Kreeda Vikas Mandal and event promoters Aryanz Sports PR & Events and sponsor Indiabulls Home Loans team has been working relentlessly to provide the best possible facilities and a memorable running experience to thousands of participants who have registered for the event. A traffic-free route has been planned out for the duration of the event, with controlled movement of vehicles in emergency situations and personnel from all departments will be on hand to help in the smooth conduct of the event.”
He also added that the Corporation will continue to provide free lodging and boarding to all the outstation athletes, a service not provided by any other race in the country.
The Full Marathon men’s field will be headed by Rahul Pal of the Army, who has a personal best of 2:21.52 and is the winner of the Allahabad Marathon 2019. He will be challenged by Harendra Chauhan, who finished runner-up behind him. Also posing a strong challenge will be Army mate Mohit Rathore, the runner-up in 2017, ASI, Pune’s Brahmprakash who clocked 2:24.50 and Air Force’s Sukhdev Singh, who clocked 2:27.51 in Allahabad.
The men’s half marathon will be spearheaded by defending champion Shankar Man Thapa, who also finished third at the Mumbai Marathon and is also the National Cross Country champion. He will have to contend with last year’s runner up and winner of the Darjeeling Hill Marathon 2019, Durga Bahadur, who clocked 1:05.48 in the Delhi Half Marathon.
The women’s half marathon will be spearheaded by Arti Patil, who finished third last year but has improved her performance, along with Swati Gadhave of Railways, Arpita Saini from UP and Gargi Sharma from Himachal.
Race Timings: The Full Marathon will be flagged off from New Viva College, Virar W at 6.00 am, while the Half Marathon will be flagged off from Victor Heights, Vasai West at 6.30 am. The 11Km Run will be flagged off from New Viva College at 6.10 am, while the 5km Timed Run will be flagged off at 7.25 am, also from New Viva College. All the junior age category events, along with the runs for senior citizens as well as the DhamaalDhaav will be flagged off from New Viva College.
Special Marathon Train: Continuing in its support for the event, Western Railway has announced a special train for the Indiabulls Home Loans Vasai Virar Mayor’s Marathon, which will leave Churchgate Station at 3.00 a.m. and reach Vasai and Virar at 4.23 am and 4.31 am respectively, after stopping at all stations. Free transport will be provided to all participants from Vasai Station and Virar Station to the respective start points.
A total of 13 pacers, led by Comrades Marathon Green Bib holder Satish Gujran will be leading various timing buses in the full marathon and half marathon.
30,000 litres of water will be distributed through a total of 24 stations and Fast&Up will be available at ten energy drink stations. There will also be six Orange stations and cool sponge stations on the second leg of the Full Marathon and Half Marathon. A Medical Base Camp will be set up at the finish point of all the timed races. There will also be 13 medical stations along the route.
The event has the support of the Palghar District Police, who will be responsible for the Law and Order as well as traffic control on the route. They will be assisted by over 300 private security personnel.
125 officials, from all over the State, coordinated by the Palghar District Athletic Association, will be responsible for the technical conduct of the event. A total of 700 volunteers, among them teachers and students will be on hand to assist in the conduct of the race.