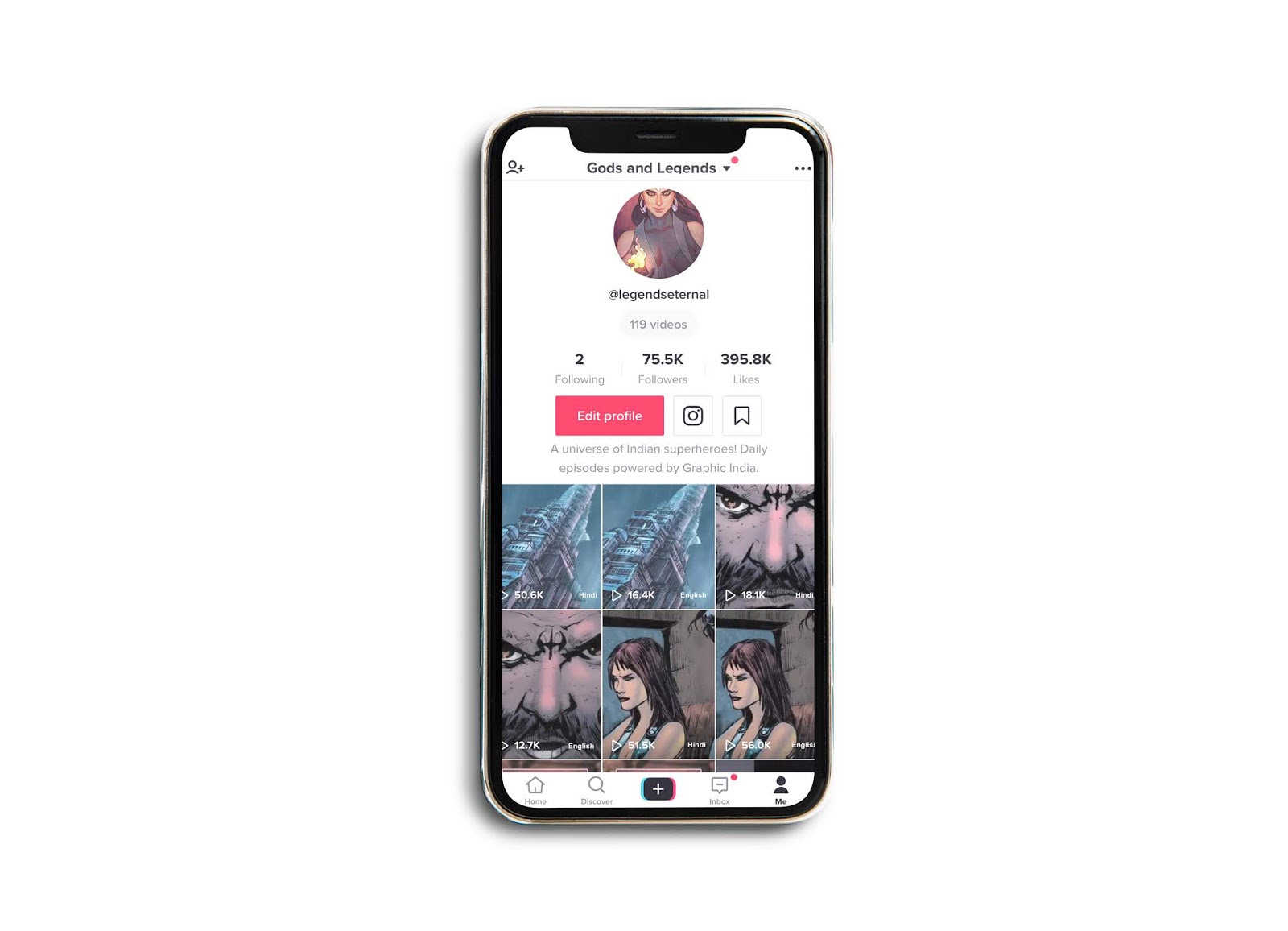 by Priya Jadhav
Graphic India’s Groundbreaking Original “Motion Comics” and “Audio Comics” Available for the First Time on TikTok in English and Hindi!
Bangalore, November 2019 – Graphic India, India’s leading character entertainment creator for original superheroes and TikTok, the world’s leading short video platform, launched short-form comic book - 18 Days: The Mahabharata, and Graphic’s female super-heroine series, DEVI on TikTok. The graphic books garnered a phenomenal 20 million views in 30 days on the platform.
The 18 Days: The Mahabharata series is based on 18 Days graphic novels created by legendary comic book writer Grant Morrison with featuring art by Graphic India’s EVP Creative, Jeevan J Kang. Reinventing the epic Mahabharata, the series on the platform is developed with a  visually appealing storyline in a  powerful format that has never been explored before on mobile devices.
“TikTok is one of the most innovative and engaging platforms globally and we are thrilled to be working with them to redefine the comic book experience for millions of Indians across the country,” commented, Sharad Devarajan, Co-Founder and CEO of Graphic India. “Graphic India will soon be reaching over 50 million views a month of our digital comics and characters in India through partners like TikTok, bringing these great stories to everyone with a mobile phone and sparking a new creative revolution in comic book storytelling for a generation.”
Karan Grover, Senior Director, Entertainment and Partnerships, Asia and MENA, ByteDance said, “At TikTok we have successfully partnered with various brands to present consumers with diverse content that is compelling and engaging. Our partnership with Graphic India is to reinforce our commitment on creating novel and unique experiences in a new engaging format. We are glad that the users have enjoyed these unique stories and we look forward to bringing more such innovative content on our platform.
Graphic India is now expanding their Motion Comics and Audio Comics offering on TikTok to include new languages beyond English and Hindi. Graphic India will also be launching new comics including; BAAHUBALI: RISE OF THE KALAKEYA: An original short form “Audio Comic” series based on the acclaimed ‘Baahubali’ films which will be available in Hindi, Tamil, Telugu and English; as well as Motion Comics based on Stan Lee’s CHAKRA THE INVINCIBLE, the original Indian superhero character created by the legendary Spider-Man and The Avengers co-creator and Graphic India founder, Sharad Devarajan.

ABOUT GRAPHIC INDIA: GRAPHIC INDIA is one of India’s leading character entertainment companies focused on creating superheroes, comics and stories through mobile and digital platforms.  Led by media entrepreneur Sharad Devarajan, Graphic India is owned by U.S. comic book Company, Liquid Comics, CA Media LP, the Asian investment arm of The Chernin Group, LLC (TCG) and Start Media LLC. The company’s partners and investors bring together decades of experience in building businesses in character entertainment, media and India. Graphic believes that India is home to some of the most creative talent in the world, with more than 600 million people under the age of 25 and more than 850 million mobile phone users in the country. The Company’s mission is to create enduring stories and heroes that foster the imaginations and fuel the inspirations of a new globalized generation of youth in both India and around the world. www.GraphicIndia.com
About TikTok: TikTok is the leading destination for short-form mobile video. Our mission is to inspire creativity and bring joy. TikTok has global offices including Los Angeles, New York, London, Paris, Berlin, Dubai, Mumbai, Singapore, Jakarta, Seoul, and Tokyo.www.tiktok.com