December 24, 2019
by Priya Jadhav
Chennai, December : Bengaluru’s Karthik Muthusamy and Hyderabad’s Aditya Raja held on to their nerves to emerge on top in their respective categories in the grand finale the JK Tyre FMSCI National Karting Championship Sodi Kart 4 Stroke at the ECR Speedway on the outskirts of Chennai.

Karthik came up with a power-packed performance to claim the Senior Category title, taking just 4:25.610 minutes to complete 12 laps. Mohammed Ridhaf of Cochin finished second with a time of 4:27.534 minutes while Pratham Kumar of Lucknow clocked 4:30.051 minutes to grab the third place.

Aditya Raja of Hyderabad came out on top in the Junior Category with a time of 4:31.965 minutes, while Delhi duo of Jasmehar Jubbal and Muskan Jubbal finished second and third with a timing of 4:33.074 minutes & 4:38.149 minutes respectively.

Meanwhile Tapasya reigned supreme, clocking a time of 4:40.180 minutes to finish the race and win the JK Tyre 4 Stroke Ladies Class Open. Ashi Hanspal of Mumbai finished behind her with a time of 4:49.550 minutes while the third place went to Ahmedabad’s Isha Sharma (4:50.060).

The Sodi Kart Sprint which was introduced for the time in National Karting Championship saw enthusiasts from across the country battle it out in four qualifying rounds in different cities before taking a shot at the grand finale in Chennai. The championship received 165 entries in Bangalore, 150 in Hyderabad, 168 entries in Coimbatore and 120 entries in Chennai out of which top 6 from each city made it to the finale with 24 across each class aiming for glory.
JK Tyre National Karting Championship Result: 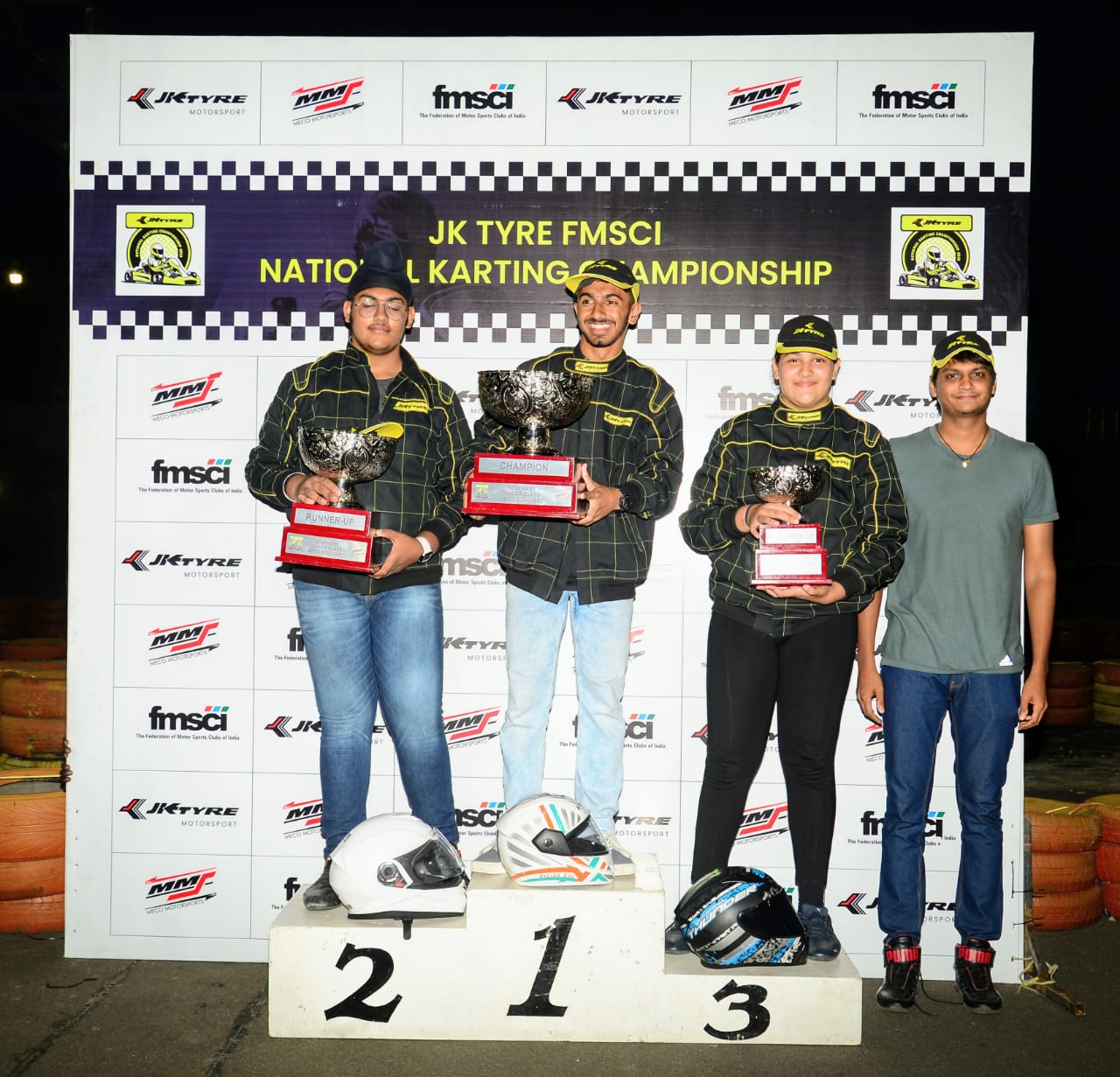 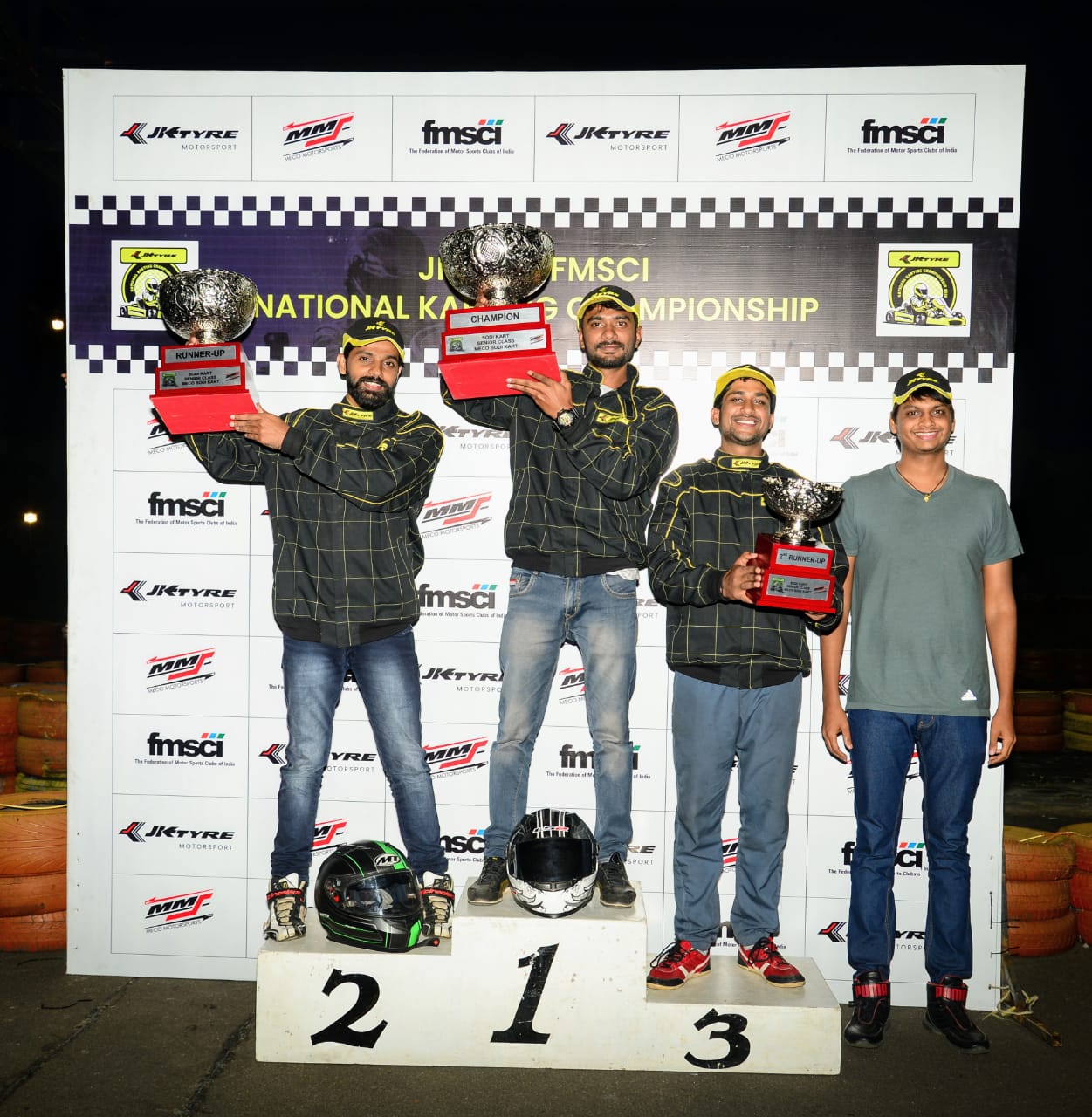 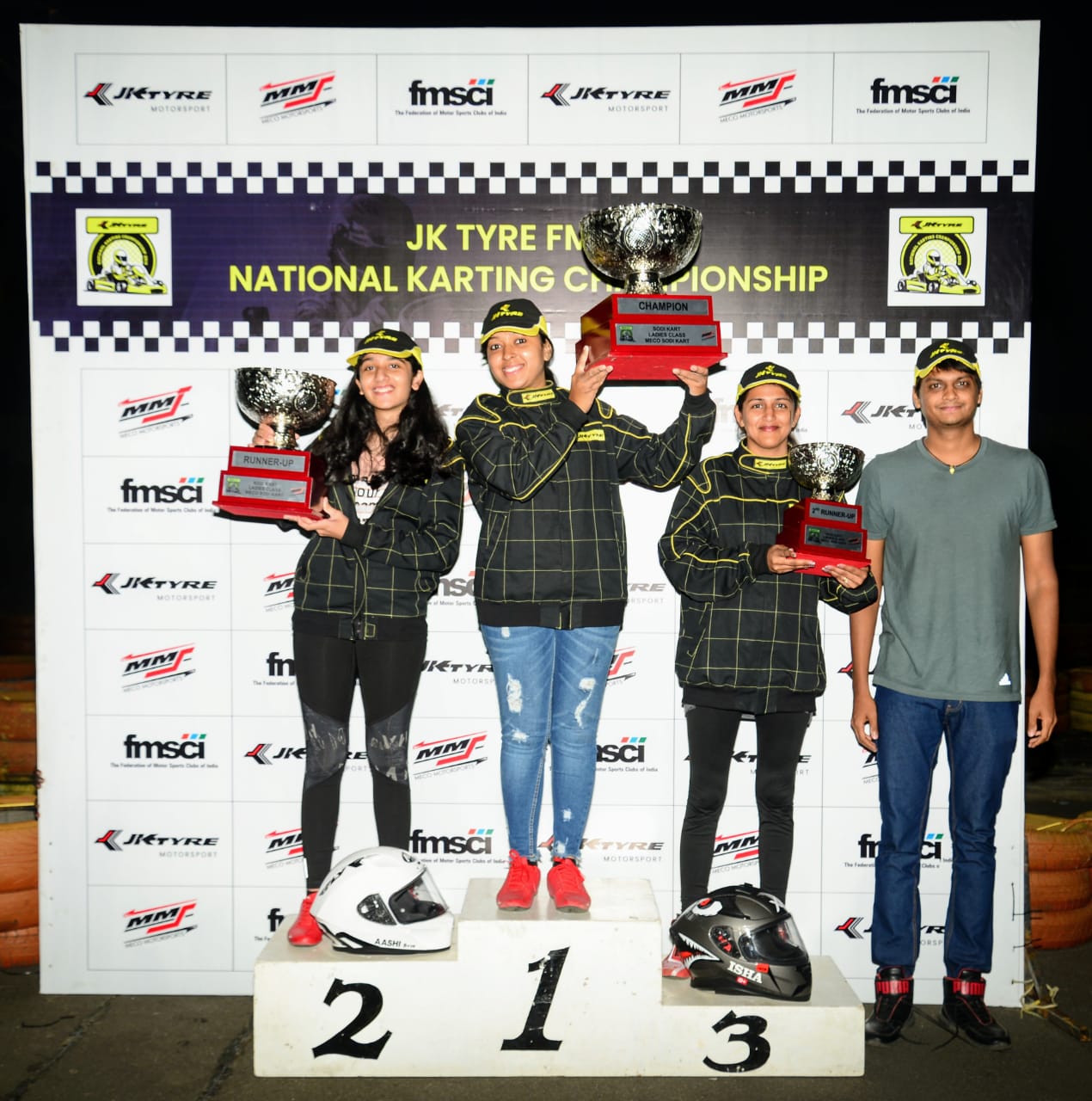 JK Tyre 4 Stroke Ladies Class Open Winners: 1) Tapasya Sudershan, Coimbatore; 2) Aashi Hanspal, Mumbai; 3) Isha Sharma, Ahmedabad
About JK Tyre Motorsport:JK Tyre has been closely associated with the world of motorsports for almost three decades back. The company laid down a long term plan to popularise and promote the sport in the country. Its first target was to change the notion that this was a sport for the elite. So it packaged and redesigned it in a spectator-friendly way, drawing the masses to the sport.
We then endeavored to spot, nurture and sharpen the drivers to turn them into world champions. With this goal in mind, we conceptualized the JK Tyre National Racing Champion in 1997. Our efforts started paying dividends in just a few years’ time, with the likes of NarainKarthikeyan and Karun Chandhok going all the way to the F1 rung, the highest level of single-seat racing in the world.
Since then, a number of stars emerged, including ArmaanEbrahim, the Maini brothers (Kush and Arjun), Anindith Reddy Konda, amongst many others.
Before all this, JK Tyre had a successful stint in rallying too, conquering the scene in the early 90s. At the same time, gradually, we moved on to various disciplines, including cross-country rallying and off-roading, leaving a mark in each of them with their unique and innovative ways.
JK Motorsports is also very proud of the role it has played in bringing women into motorsports in a big way. Apart from encouraging them to get into the sport through karting as kids, we also gave them opportunities in various national championships.
Last year was particularly rewarding for us as an All-Women Racing team was introduced for the first time in the LGB 4 category. In addition, we also undertook various other initiatives to encourage them to try motorsports, even if for fun to begin with.


We tied up with the Young Women's Wing of FICCI to conduct the YFLO Power Drive, a TSD Event for their lady members. The event saw more than 100 ladies participating in the event and driving all the way to Manesar from Delhi. We also associated with the Times Group and executed the JK Tyre Times Women’s Drive, North with as many as 300 ladies taking part in this FMSCI approved TSD Drive from Delhi to ChandigarhWe also had the Rally to the Valley, again only for women, which was another major hit. Over 300 women participated in it, driving from Mumbai to Lonavla. The entire route saw spectators line up as the ladies, in their decorated cars and fancy attires, raced in their quest for mega prizes.
To supplement JK Tyre’s entry into the two-wheeler market, the JKNRC hosted the Suzuki Gixxer Cup and the Red Bull Road to Rookies Cup categories and saw enthusiastic participation from across the country.
Today, the company is synonymous with motorsports, and even more so with racing, creating a lot of goodwill for the brand. Right from budding racers to accomplished drivers in the country, everybody owes their rise and success to JK Tyre.