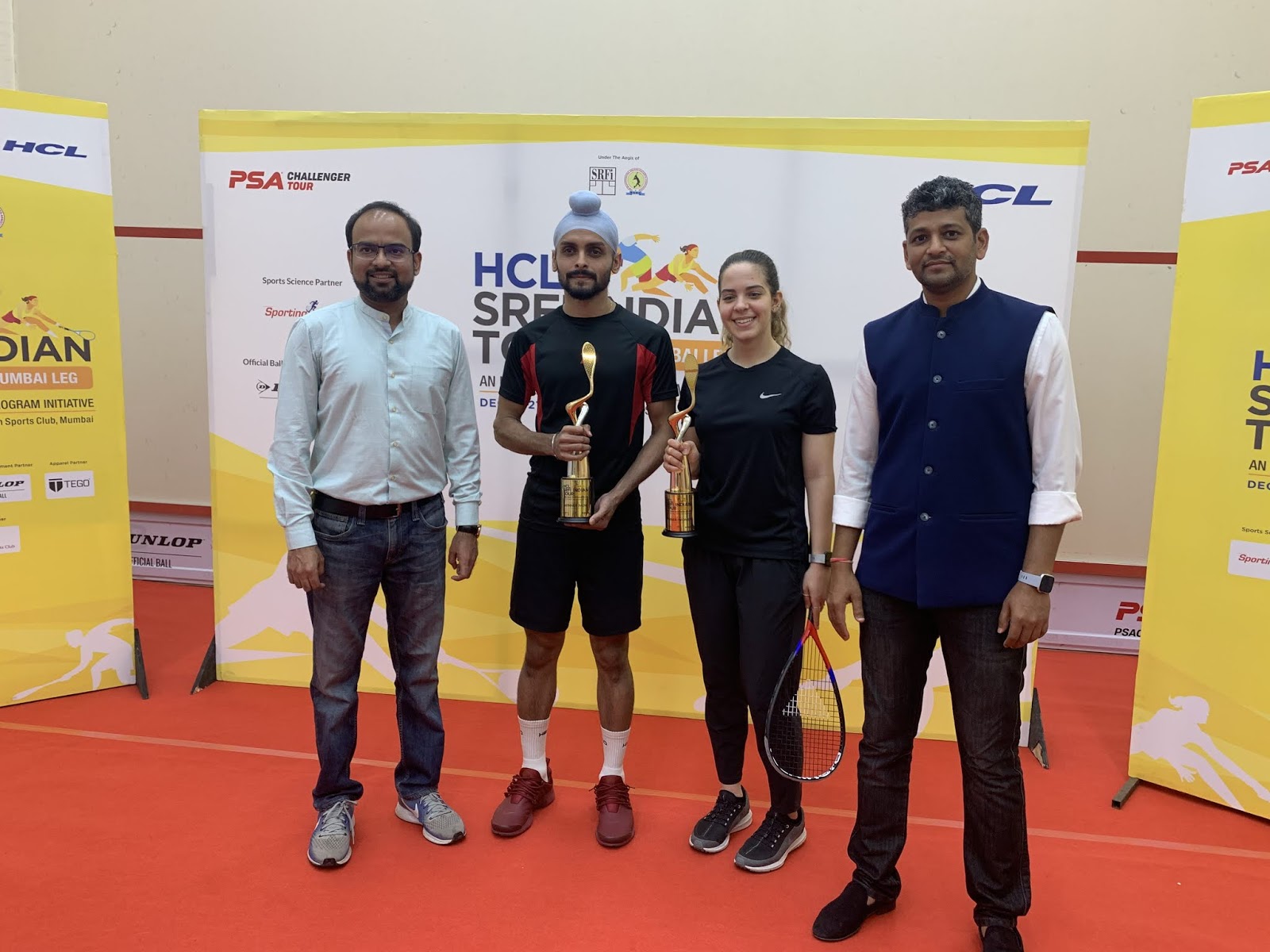 by Priya Jadhav
Mumbai , December:  HCL, a leading global conglomerate, today announced the successful completion of the third leg of theHCL-SRFI India Tour. The five-day tournament was held at the Willingdon Sports Club, Mumbai from December 17 to 21 and saw  participation of approximately 50 players from 10 countries. Harinder Pal Singh from India won the Championship in the men’s category of $20k; while Hana Ramadan from Egypt won the women’s event of $12K. The winners were felicitated by Chief Guest, Amol Mazumdar, one of the most prolific Ranji players in India.
4th seed Harinder Pal Singh Sandhu concluded a successful week as he defeated 7th seed Tomotaka Endo (JPN) of Japan in straight games to clinch the trophy at the finals of the HCL-SRFI India Tour played at the Willingdon Sports Club Squash Courts here on Saturday. Meanwhile, 7th seed Hana Ramadan of Egypt overcame a strong challenge from Lucy Turnmel of England to take home the Women’s Open Title.
Harinder whose journey has been marred with injuries had a fantastic run up to the final defeating top players including the 2nd seed Aditya Jagtap.  Harinder brought out his A game right from the first point putting Tomotaka in a tough spot with his drop shots , Harinder closed the first game at 11-5 after leading 9-2 at one point. The second game saw no change in fortunes for the Japanese as Harinder kept executing his plans consistently to take the 2ndgame 11-6. The 3rd game saw a  tough battle between the two and with the scores levelled at 4-4. Just when it looked like Tomotaka had crawled back into the game, Harinder found his rhythm and managed to score back-to back points to take a 8-4 lead eventually taking the match 11-7 and the championship by 11-5, 11-6, 11-7.
Speaking about his journey so far Harinder said, “ After being diagnosed with Scoliosis and Nerve Impingements I was unable to eventwalk and do basic activities. I recieved a lot of help from the Abhinav Bindra Targeting Performance Center in Mohali as they helped be relearn and adjust to my new body very quickly .  I have not fully recovered and I have to give my 200% in every match in order to move ahead. I am happy that my efforts have paid off in this tournament and looking forward to another HCL- SRFI PSA in Jaipur”.
Meanwhile, Hana Ramadan had to fight hard to fight hard to take the women's title defeating Lucy Turnmel 11-8, 6-11, 11-4, 11-3. Hana was pushed hard by Lucy right from the first game but Hana kept her cool to win points at crucial moments to take the 1st game 11-8. Lucy came back strongly pushing Hana to all corners of the court to take the 2nd game and level the scores. Lucy lost momentum after her win which helped Hana dominate the 3rd and 4th game 11-3, 11-4 to clinch the title.
Congratulating the winners of the HCL-SRFI India Tour, Rajat Chandolia, Head of Brand Initiatives, HCL Corporation said, “When HCL started supporting Squash, our vision was to popularize the game and ensure that Indian players were ready for the International podium. I believe that the HCL Squash Podium Program, which was conceptualized in partnership with SRFI, has started to drive visible impact towards realizing that goal. The HCL—SRFI India Tour, for example, has helped Indian players improve their international rankings, while playing from their home ground.”
Cyrus Poncha, Secretary General, ‎Squash Rackets Federation of India (SRFI) said, “I am extremely delighted with the performance of Abhshikek Agarwal who was a wild card entry but played very well and made it to the semi-finals. I would also like to congratulate Harinder for his brilliant performance and his first tournament win in the 20k category. This was a very eventful tournament, where all the top seeds lost early but the younger players performed exceptionally well. Not just in India, but even in tournaments abroad, the Indian squash players are setting new benchmarks of success and I am confident that the future of Indian Squash is very bright. Our association with HCL has been beneficial for the sport and this is the 13th event that we have successfully concluded under our partnership.”