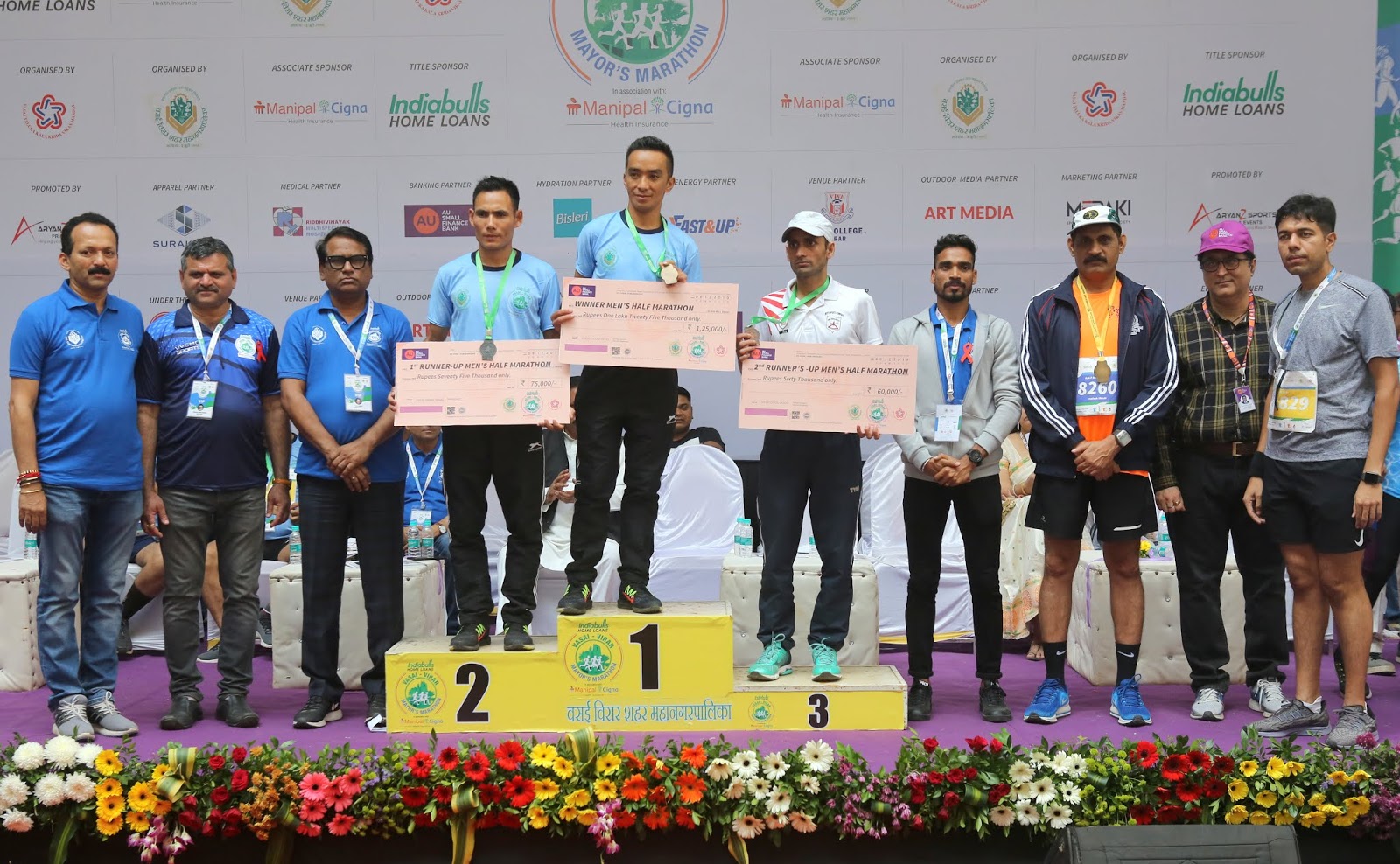 by Priya Jadhav
Armyman Anish Thapa, relishing the cool climate and helpful conditions, ran a blistering race to set a new Half Marathon course record and also lead led Navy’s Tirtha Pun and fellow Army runner Dinesh Kumar under the mark in the 9th Indiabulls Hime Loans Vasai Virar Mayor’s Marathon, in association with ManipalCigna, here, on Sunday.
Thapa breasted the tape in a time of 1:04.37, shaving off 19 second from G Lakshmana’s course record of 1:04.56, set in 2014. Tirtha Pun clocked 1:04.42, while Dinesh Kumar followed him in 1:04.46.
2017 runner up Mohit Rathore was also on track to set a new course record in the Full Marathon, when he crossed the half way mark in a time of 1:06, however, the rising temperature, saw him flag a bit in the second half before finishing in 2:24.22, followed by Sukhdev Singh in 2:31.42 and Dharmender in 2:32.39.
The women’s half marathon also saw excellent performances, with Kiran Sahdev from Railways taking top spot in 1:17.51, followed by Komal Jagdale in 1:18.24 and Nandini Gupta (1:19.13).
While Mohit Rathore was richer by Rs 2.5 lakh, the men’s and women’s half marathon winners took home Rs 1.25 each respectively.
Speaking to the media after the event, Rathore said, “With some more competition, I could have finished much faster. I was on course for a 2:20 finish, but could not maintain the pace while running alone.” He also said he would be trying to meet the Olympics qualifying time in the upcoming events.
Half Marathon winner Anish Thapa said he never expected to break the course record and that was not on his mind, but he got into a good rhythm early and because of his fellow runners also pushing him throughout the race he could maintain the pace.
Kiran Sahdev clocked her personal best and claimed confidently that she could have run faster had she pushed herself. However, as it is the end of the season she did not want to go all out and risk injury.