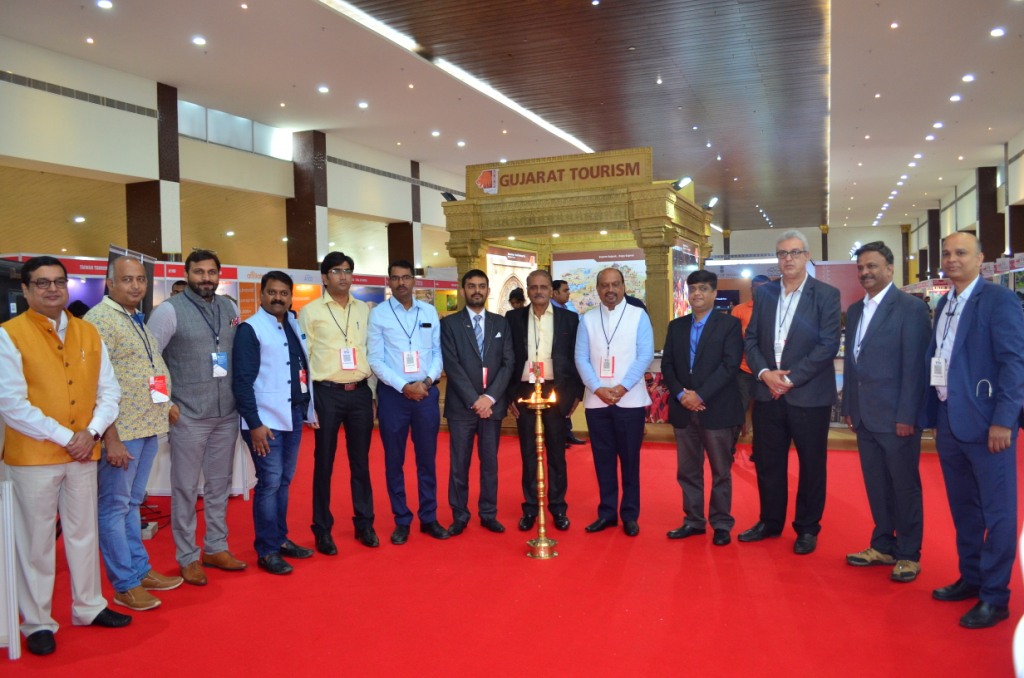 The best place to get attractive travel deals on tourism products
by Priya Jadhav
September, 2019: Travel & Tourism Fair (TTF), India’s biggest travel trade show network commences today at Messe Global Laxmi Lawns, Magarpatta. After three packed shows in Ahmedabad, Surat and Mumbai, Pune is the last stop in four-city TTF West series and provides a vital networking platform for buyers and sellers to explore business opportunities in the region.
The much-awaited travel trade show has over 100 exhibitors from 14 Indian States & UTs and 5 Countries showcasing their travel services, products, destinations and much more. The three-day travel fair brings together state tourism boards, national tourist offices, hoteliers, airlines, tour operators and travel agents, online travel companies, railways and cruise lines under one roof. It also promotes their best holiday packages and hotel deals to travel enthusiasts from Pune and neighbouring regions to plan their upcoming holidays.
Over the years, TTF has successfully offered great networking opportunities for the travel trade in and around the city, promoting interaction with their counterparts from India and abroad.
Taiwan is present at TTF Pune as the Feature Country. Other international representation in the show includes participants from countries such as Nepal, Thailand and UAE
Closer home, Gujarat, Odisha and West Bengal are participating as the Partner States of TTF Pune. Himachal Pradesh is present as the Feature State. Apart from that, other states being represented at the show include Assam, Dadra & Nagar Haveli, Delhi, Goa, Haryana, Jammu & Kashmir, Karnataka, Kerala, Maharashtra and Puducherry.
India Tourism is yet again present in the show in a big way, under the theme ‘150 Years of Celebrating the Mahatma’.
Over 1,800 trade visitors are registered to visit the travel trade fair over a span of three days. Over 1,000 general visitors are also estimated to attend the show.
At TTF, visitors are assured of getting the best deals on holiday packages, hotel accommodation and other travel options, with the facility of booking on-the-spot. For the city’s travel trade, TTF is an opportunity to network and transact with national and international exhibitors.
The first half of today i.e. 11:30 am to 3:00 pm is exclusively reserved for the trade visitors. The show will be open to all 3 pm onwards.
TTF Pune is supported by Incredible India, as well as TAAI, UTEN, OTOAI, ATOAI, ADTOI, IATO, IAAI, SKAL INTERNATIONAL, ETAA, TAAP, TAAN.
About TTF (www.ttfotm.com):TTF is India’s largest travel trade show network. Since 1989, it provides an annual marketing platform and the opportunity to network with the travel trade in major cities. The regional circuit of TTF branded shows covering 8 cities in India culminates into the grand finale- OTM held in Mumbai every year, which is India’s biggest travel trade show on the basis of the number of sellers, buyers and rented area.
About Fairfest Media Ltd, organisers of TTF (www.fairfest.com):Fairfest Media Ltd, founded in 1988 in Calcutta, has served more than 2,500 Exhibitors from 80 Countries through its TTF, OTM and BLTM branded shows. It is the largest travel trade show organiser in the country.