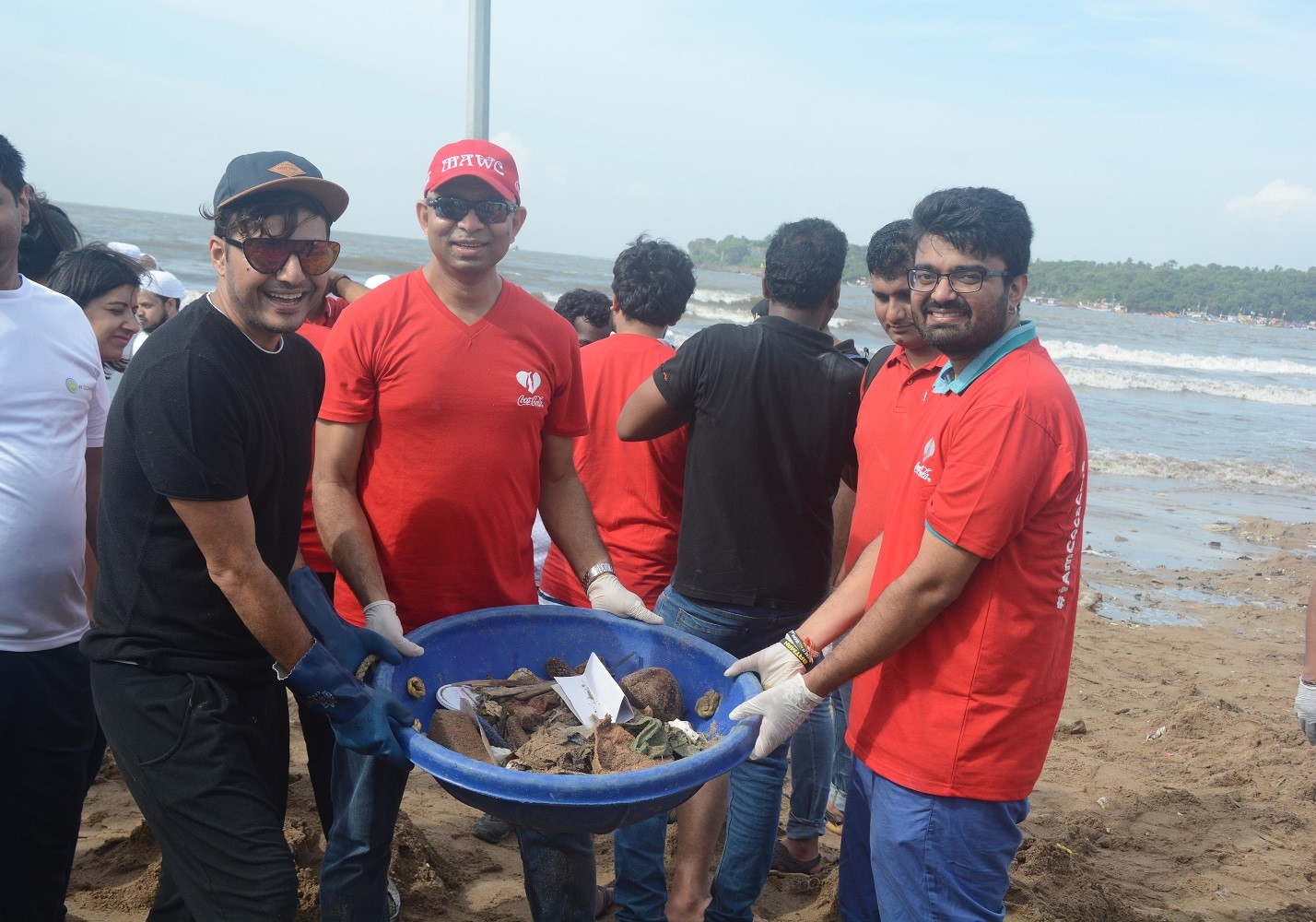 Launch a year-long volunteer program to beat plastic waste
by Priya Jadhav
Mumbai, September, 2019: Adopting a collaborative approach towards waste management, Coca-Cola India along with AIESEC teamed up with Afroz Shah led ‘Date With Ocean Foundation’ for a yearlong volunteer program to beat plastic pollution at Sanjay Gandhi National Park, Borivali and beaches of Mumbai.
Commenting on the volunteer program, Afroz Shah, said, “Waste management is a global environment concern. To see a real change at the ground level, a collaborative and consistent effort is required to clear the waste out of our environment sustainably. Towards this, our endeavor is to create a sense of belonging in the hearts and minds of people by engaging citizens, students and corporate though a volunteer program to beat plastic pollution as well as suggest ways for a circular economy.”
Launching the project, Afroz Shah led 500 school children, AIESEC volunteers, Coca-Cola employees, citizen groups and key stakeholders in a beach clean drive at Versova beach. The yearlong volunteer program involves awareness creation, waste segregation, waste management program that will impact more than 15, 000 people in 43 padas around SGNP and beaches in Mumbai.
Speaking on the occasion, Devik Sodha, President, AIESEC India, said, “We at AIESEC truly believe that leadership is one of the fundamental solution to the world issues. We place our confidence in youth as the key to unlock a better future and believe that it is the responsibility of the youth to actively engage in protecting the environment as well as bringing behavioral change in society. AIESEC is committed to support the Afroz Shah led initiative by providing volunteer leadership to the community efforts and empower the next-gen community leaders.”
Mr. Ishteyaque Amjad, Vice-President, Public Affairs, Communications & Sustainability, Coca-Cola India and South West Asia, said, “Plastic waste management is a key priority for India. At Coca-Cola, we care about the country and our aspiration – as part of our global World Without Waste vision – is to help collect & recycle the equivalent of every bottle and can that we sell by 2030. Accordingly, Coca-Cola India is pleased to collaborate with AIESECers and Afroz Shah towards a World Without Waste. We believe that by recovering and recycling more plastic, less will end up in rivers, oceans and forests. “
As part of this program, every week Afroz Shah along with volunteers will do their bit by:
o   Cleaning Danapaani beach, Versova Beach, SGNP Forest & River Mithi.
o   Train people living in the human-ocean conflict zone and on the banks of River Mithi to get Circular economy in their lives
o   Train people living in the human-animal conflict zone at Sanjay Gandhi national park, Borivali to get Circular economy in their lives
o   4Rs: Refuse, Reduce, Reuse & Recycle - Monetize plastic and no litter
o   Involve youth organization AIESEC, students and young leaders to contribute every week
o   Involve plastic industries in implementing Extended Producer’s Responsibility (EPR)

About Coca-Cola India: Coca-Cola in India is one of the country’s leading beverage companies, offering a range of healthy, safe, high quality, refreshing beverage options to consumers. Since its re-entry in 1993, the company has been refreshing consumers with its beverage products – Coca-Cola, Coca-Cola Zero, Diet Coke, Thums Up, Thums Up Charged, Thums Up Charged No Sugar, Fanta, Limca, Sprite, Maaza, VIO "flavoured milk, Minute Maid range of juices, Minute Maid Smoothie and Minute Maid Vitingo, Georgia range of hot and cold tea and coffee options, Aquarius and Aquarius Glucocharge, Schweppes, SmartWater, Kinley and Bonaqua packaged drinking water and Kinley Club Soda. The Company along with its owned bottling operation and other bottling partners, through a strong network of over 2.6 million retail outlets, touches the lives of millions of consumers, at a rate of more than 500 servings per second. Its brands are some of the most preferred and most sold beverages in the country – Thums Up and Sprite – being the top two selling sparkling beverages.
The Coca-Cola India system provides direct employment to 25,000 people and indirect employment to more than 150,000 people. The Coca-Cola system in India is contributing in its own small way to building sustainable communities through community initiatives like Mission Recycling, Clean Shores, Parivartan and Unnati and by reducing its own environmental footprint.