An initiative of Miraclemunj in association with Runtastic Dil se and Boarding Kites Entertainment successfully concluded Thane Going Pink First edition on Sunday, March 19, 2017 at Dosti site in Balkum, Thane.
by Suman Gupta
Thane, March 19, 2017:  Dosti Thane Going Pink, empowering Women, an initiative to raise awareness about the importance of a healthy lifestyle for women and issues like breast cancer, successfully concluded First edition in Thane on Sunday, March 19, 2017 at Dosti site in Balkum, Thane. 4000 women across age groups and from all different segments of the society participated enthusiastically in the 3 km, 5 km, 10 km and 21 km categories. Flagging off the run was super-model, actor, Ultraman and Pinkathon founder Milind Soman along with prominent women personalities like Ms. Sonali Kulkarni - An Indian actress who has appeared in many Marathi and Hindi films. They expressed their wholehearted support for the noble cause. 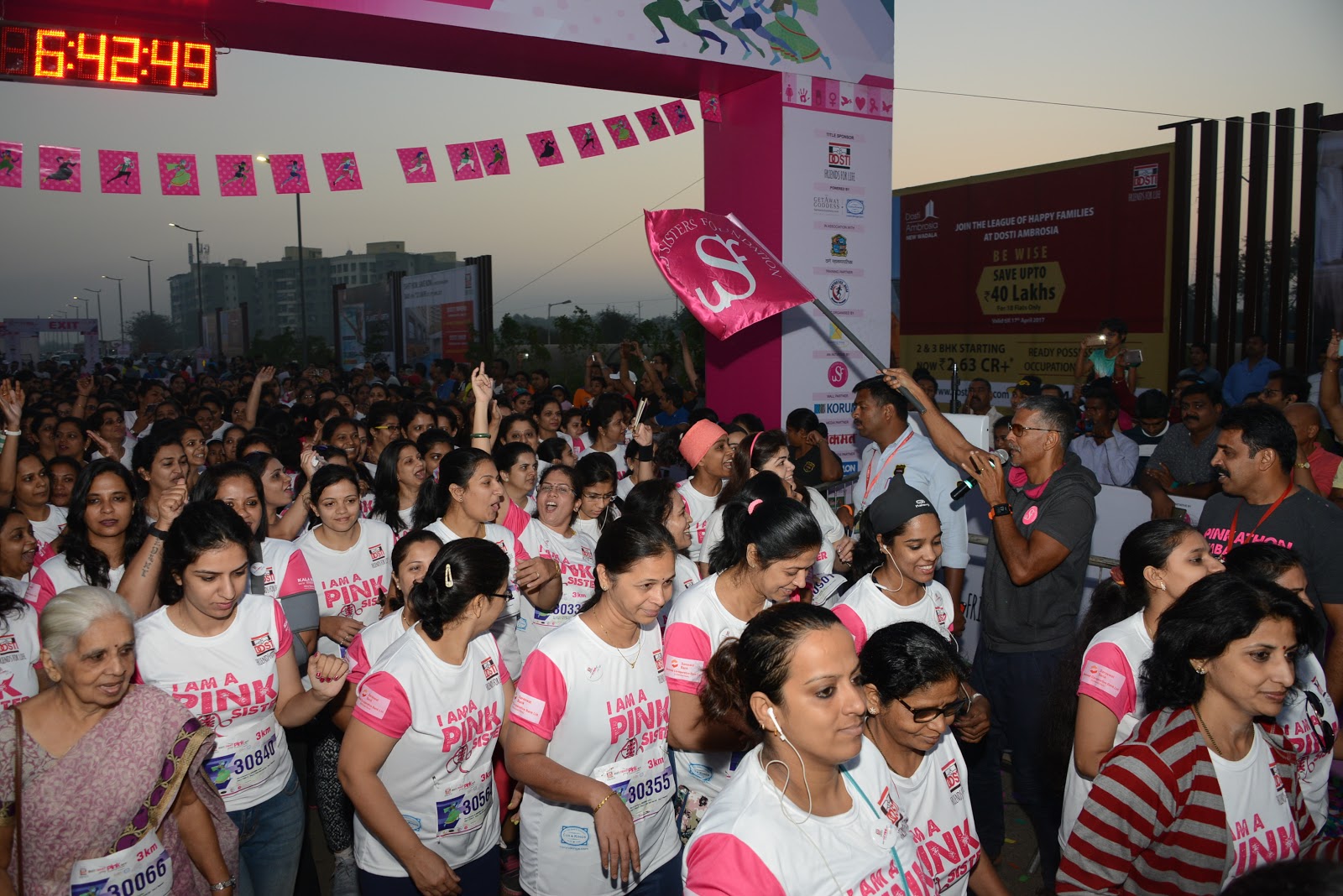 Some of the noteworthy participants in the run were a group of Animal angels, 20 visually impaired girls and 10 hearing impaired girls running the 3KM/ 5km/ 10km distance with enthusiasm. Additionally the run witnessed a squad of cancer survivors who participated in 3KM and 5km. 25 Baby wearing mothers carrying babies just a few months old walked the 3KM distance. The run had participants as young as 4 months and as old as 84 years.
Commenting on the success of Dosti Thane Going Pink Milind Soman, Founder Pinkathon said, "It is the beginning of a movement carried forward by a growing community of empowered women across India, who share a belief that a healthy family, a healthy nation and a healthy world begins with empowered women. The first step in empowerment is taking control of your own health, respecting yourself and understanding and celebrating the value you bring to your family and society. Empowerment is not a gift of society; it is a gift you give yourself. We are delighted to have such diverse crowd right from young school students, housewives, corporate, cancer survivors, underprivileged and visually impaired girls participating in Thane Going Pink." 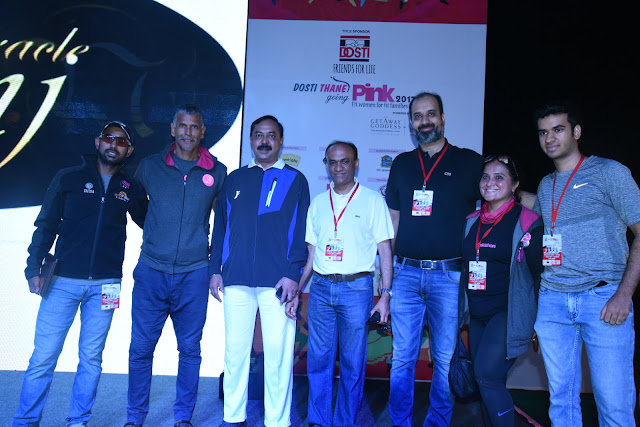 Mr. Deepak Goradia – Vice Chairman & Managing Director, Dosti Realty says “Dosti Realty is glad to play a key role in Dosti Thane going Pink to help spread awareness on breast cancer and women’s fitness via this unique platform of a Women Marathon. We have always believed in the abilities of women and encouraged them even within the organization through women friendly policies that allow them to strike a work life balance comfortably. A healthy lifestyle is another aspect that we have always advocated and it has been an important aspect kept in mind while designing our projects.  We understand the constraints one faces in making time to go out to get the necessary exercise and hence we create multiple activity areas within our projects be it Dosti Acres, Dosti Vihar, Dosti Imperia etc to tackle that issue . Not only do we provide the usual swimming pool and gymnasium, but we also have  squash courts, a rock climbing wall, tennis courts, badminton courts, table tennis areas, a jogging track , yoga/ meditation areas etc catering to all age groups . We wish Mr. Milind Soman and the team the best in their efforts to take Pinkathon across other locations to spread this message of a healthy lifestyle.”
Mr. J.P. Singh, COO, Sales & Distribution, Leisure Travel, Cox and Kings Ltd.: “We are glad to be associated with ‘DOSTI Thane going Pink’ initiative which focuses on health and wellbeing of women. Cox and Kings have always celebrated aspirations, spirit and ability of women to do things in a way that is unique to them, through our women only tours- Getaway Goddess. Fun, safe and stress-free experiences are the highlights of our tours and through this event, we hope to popularize it amongst our target market.”
DOSTI Thane Going Pink has received huge response from corporate sponsors like Dosti Realty, Cox and Kings, Goodwin Jewelers, Trueweight and TMC. 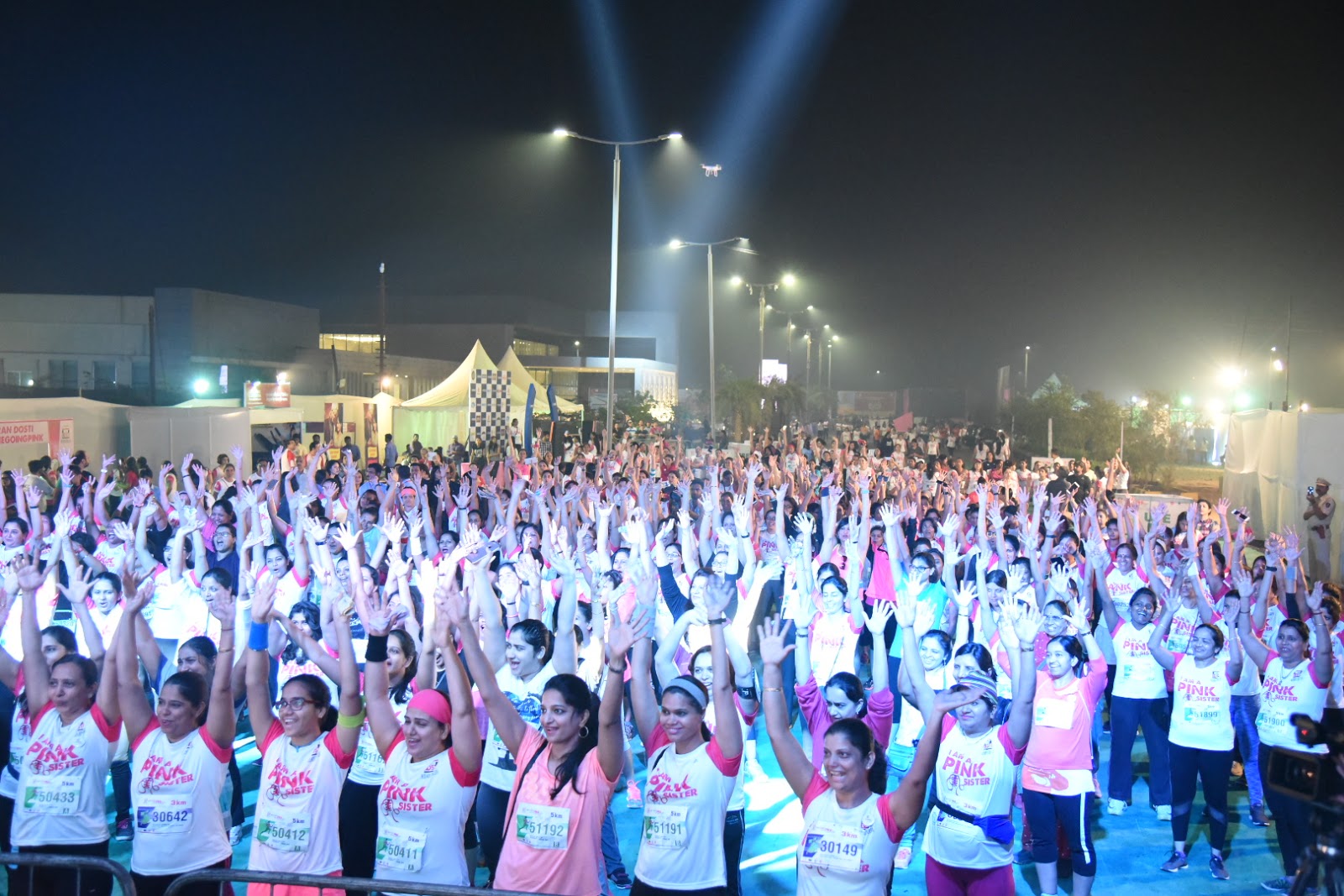