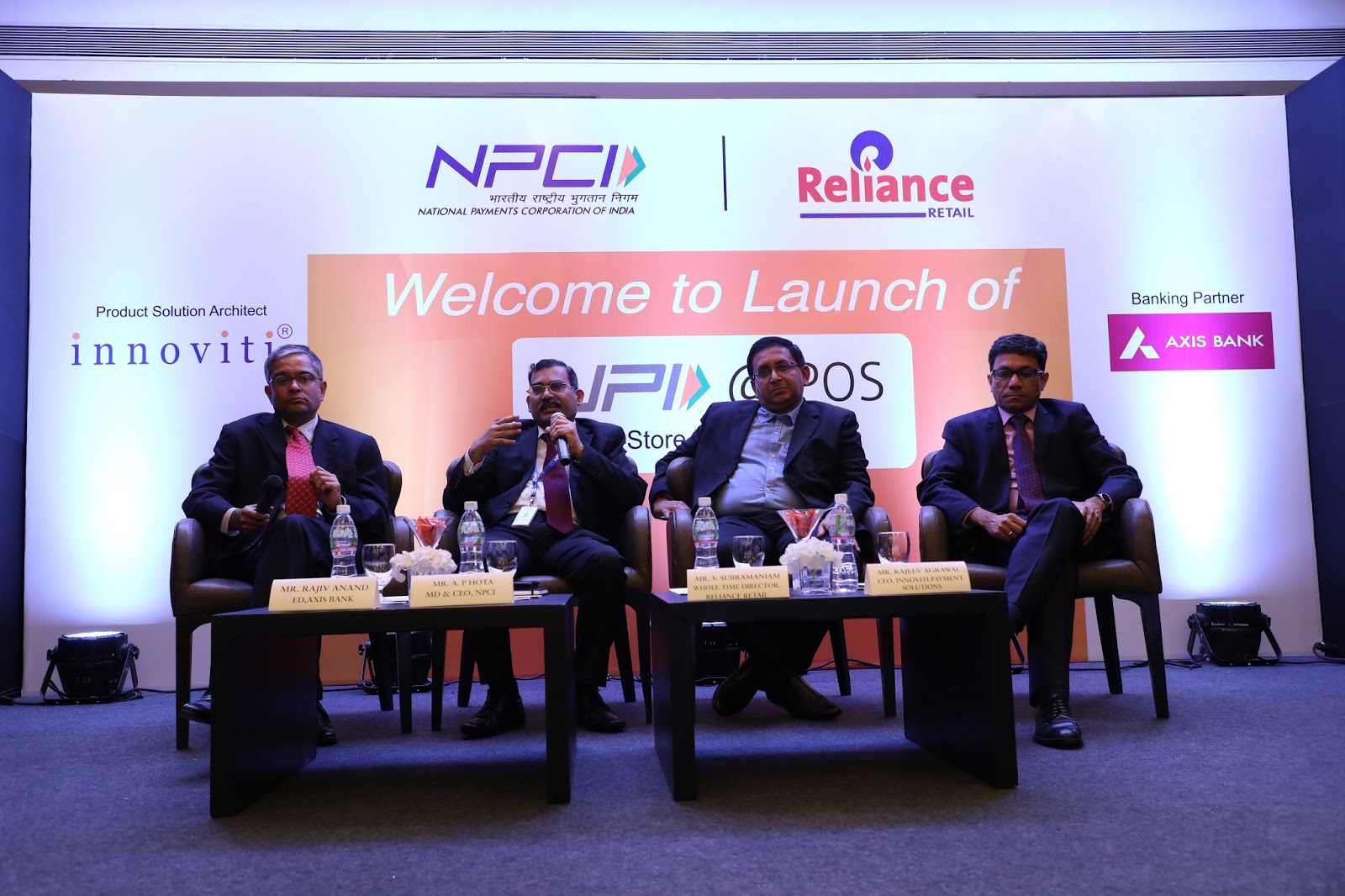 ·Launch opens a path for faster ramp up of NPCI’s mission to drive cashless payments under the Digital India initiative.

·Customers can use any UPI-based app for making their in-store purchases - including NPCI’s BHIM or any other Bank promoted UPI-app.

Mumbai: National Payments Corporation of India (NPCI) and Reliance Retail announced the launch of a new in-store payment solution that will enable customer payments via Unified Payments Interface (UPI) platforms like BHIM or other bank-promoted UPI payment apps. The platform is architected by Bangalore-based Innoviti Payment Solutions, with process support from Axis Bank.

Mr. A. P. Hota, MD & CEO, NPCI said, “As part of NPCI’s overall mission to encourage faster adoption of cashless payments in retail, the current rollout opens the path to extending UPI payment acceptance to potentially all the card accepting merchants in India. With the fast growing popularity of UPI-payment apps like NPCI’s BHIM app which has seen close to 20 million downloads, this initiative will increase UPI payment acceptance points in retail stores. It is expected to play a vital role in driving a more cashless future.” 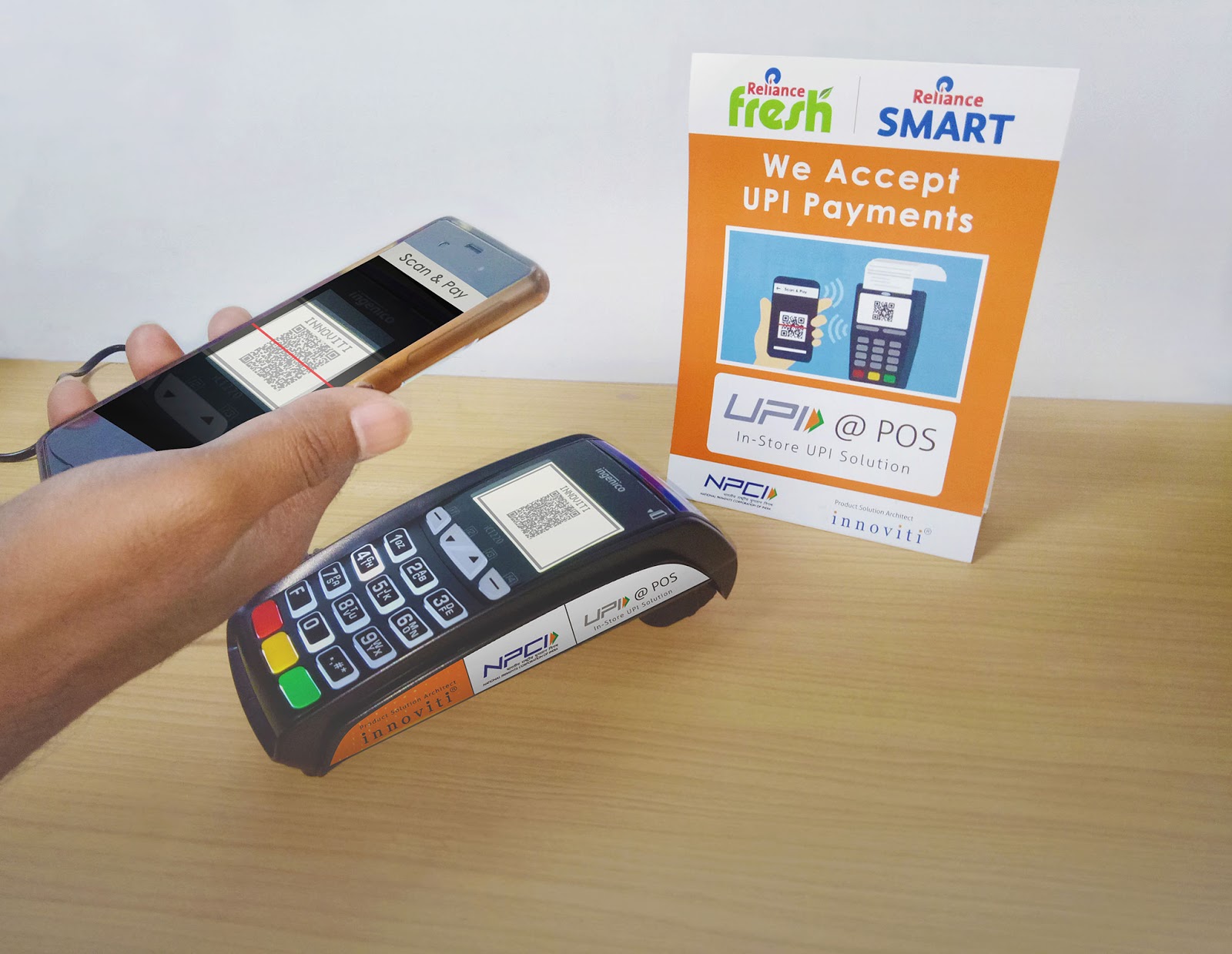 Mr. Brian Bade, CEO, Reliance Digital added, “Reliance Digital, India’s largest electronics retail chain, has always embraced best of technological innovations with focus on improving customer experience. We have strived to bring industry leading initiatives first to our customers and introducing this new digital transaction facility is another step in that direction. It is our pleasure to be part of this landmark initiative as we lead the introduction of NPCI’s new in-shop UPI payment facility with the maiden transaction at our Reliance Digital store.”

Mr. Rajeev Agrawal, Managing Director & Chief Executive Officer of Innoviti Payment Solutions said, “We are very excited about the possibilities that this new rollout creates for rapidly scaling up seamless UPI-acceptance across the vast existing base of over 1.7 million card accepting merchants. We believe our solution solves a real-world problem of UPI acceptance in retail in a conclusive manner. We wish to thank NPCI for their support and encouragement in tackling this long standing implementation hurdle that was holding back the fast roll out of UPI-acceptance in large retail.”

Mr. Rajiv Anand, Executive Director, Axis Bank said, “This is a great initiative to showcase the simplicity of UPI Payments in stores. Through this partnership with Reliance Retail and Innoviti and with great support from NPCI, Axis Bank is excited to enable in-store digital payments for millions of users of UPI apps like BHIM and Axis Pay. With the ability to make payments from any bank account instantly and securely, UPI is all set to drive the growth in digital transactions.”

How UPI / BHIM at POS works?
Ø  This innovative dynamic QR-code based solution uses the store’s existing credit/debit card POS terminal to enable UPI-based cashless payments.
Ø  When a customer requests UPI Payment mode, the cashier simply needs to select the ‘UPI Payment’ option on his existing card POS terminal and inputs the relevant bill payment amount.
Ø  This triggers the generation of a dynamic QR-code on the POS terminal screen itself which can be scanned into any mobile-based UPI-apps like BHIM used by the customer.
Ø  When scanned, the QR code automatically transfers relevant transaction details and displays it on the customer’s payment app for authorizing payment transfer.
Ø  Once the payment transfer from customer’s UPI-linked bank account to store’s UPI-linked account is completed, the payment solution triggers a settlement confirmation to the initiating in-store POS terminal for printing out a transaction completion charge slip.

Benefits:
·         By enabling such a UPI payment confirmation on the merchant POS terminal itself, the new in-store UPI interface addresses a long standing implementation hurdle holding back faster spread of UPI-acceptance in large multi-lane retail stores.
·         With multiple checkout points, the cashiers in these stores have no direct means of payment receipt prior to releasing the purchased goods to the customer. This is unlike a small single cashier store where such a confirmation could be received via a simple text message to the single cashier’s own mobile phone.
·         The new solution enables the crucial payment confirmation to be received on cashier-independent infrastructure like the store POS terminal - a necessity for multi-cashier stores with high cashier churn.  Usage of a Dynamic QR with the merchant VPA (Virtual Private Address) or UPI ID and amount embedded in it eliminates the need for typing in of the customer or merchant credentials in the POS.
·         This process offers convenience besides eliminating the cumbersome and error-prone process of typing out credentials.

About NPCI:National Payments Corporation of India (NPCI) was set up in 2009 as the central infrastructure for various retail payment systems in India and was envisaged by the Reserve Bank of India (RBI) as the payment utility in the country. Bharat Interface for Money (BHIM) / Unified Payments Interface (UPI) is a smart mobile phone based app that allows simple, easy and quick payment transactions. One can easily make direct bank to bank payments instantly and collect money using mobile number or payment address (UPI ID).www.npci.org.in

About Reliance Retail: Reliance Retail Limited (RRL), a subsidiary of Reliance Industries Limited (RIL), opened its first retail store in November 2006, and has grown to 3,553 stores across 686 cities with an area of over 13.25 million sq.ft as on December 31, 2016. Reliance Retail is India’s largest retailer in the country and has established leadership position across various focus sectors. Reliance Fresh, Reliance Digital, Reliance Trends and Reliance Footprint are market leaders with the largest number of showrooms in their respective format sectors.www.relianceretail.com

About Innoviti Payment Solutions: Innoviti Payment Solutions Pvt. Ltd. (formerly Innoviti Embedded Solutions Pvt. Ltd.) has been a pioneer in the use of technology to solve real-world payment acceptance problems of merchants.  Using its indigenous developed technology and constant innovation, Innoviti has delivered differentiated solutions for payments automation, consumer credit distribution and SME lending that have become a benchmark in their markets.  Innoviti processes over Rs. 12,000 Cr. of payment transactions annually including Rs. 1,000 crore of credit.  Innoviti’s smelending.com is #1 in the segment of SME lending, processing over Rs. 400 crore per year. uniPAY is India’s only omni-channel payment platform for managing payment automation.   The company has won Deloitte Asia Pacific award three years in a row and Red Herring Asia award twice. Innoviti is backed by marquee investors such as Titan Company (JV between Tata Group and TIDCO), Catamaran Ventures and New India Investment Corporation, Canada. http://www.innoviti.com

About Axis Bank: Axis Bank is the third largest private sector bank in India. Axis Bank offers the entire spectrum of services to customer segments covering Large and Mid-Corporates, SME, Agriculture and Retail Businesses. With its 3,211 domestic branches (including extension counters) and 13,726 ATMs across the country, as on 31st December 2016, the network of Axis Bank spreads across 1,946 cities and towns, enabling the Bank to reach out to a large cross-section of customers with an array of products and services. The Bank also has nine overseas offices with branches at Singapore, Hong Kong, Dubai (at the DIFC), Shanghai and Colombo; representative offices at Dubai, Abu Dhabi and Dhaka and an overseas subsidiary at London, UK. The Bank’s websitewww.axisbank.com offers comprehensive details about its products and services.