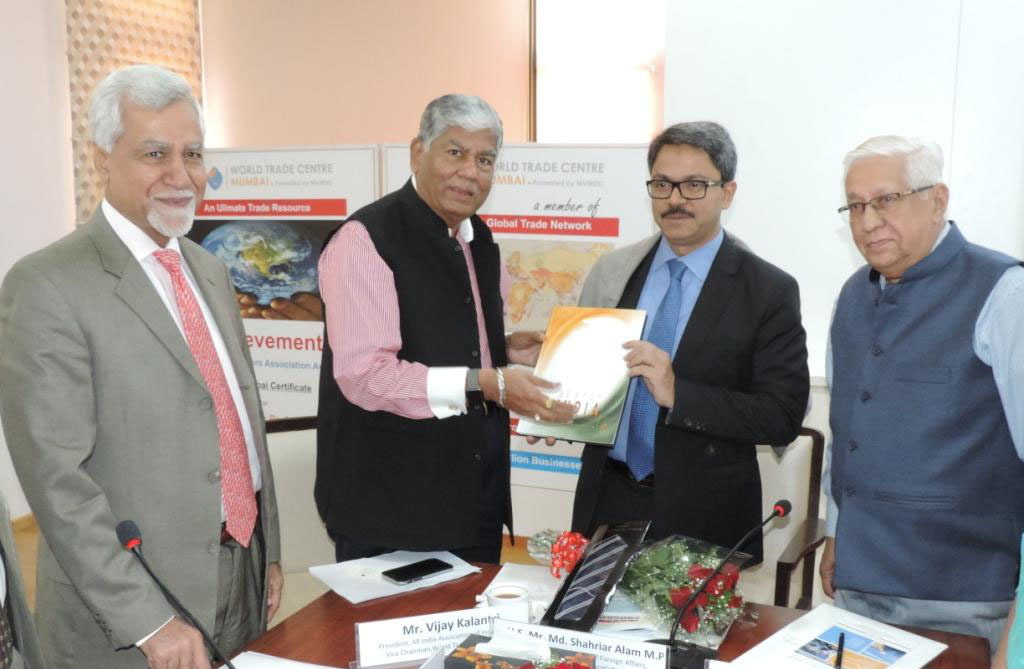 by Suman Gupta
India has played a commendable role in the independence of Bangladesh and both countries continue to maintain longstanding and cordial relations. Bangladesh economy has witnessed considerable changes over the last 8 years attaining on an average 6 per cent growth. The growth of Bangladesh economy last year was 7.05 percent and the country is likely to grow at 7.5 per cent this year. Bangladesh exports continue to perform well increasing by 10 percent to reach $34 billion dollars of which garments sector alone accounted for $ 28 billion, making Bangladesh the second largest exporter of textiles in the world. The textiles sector has now set a target of dollar $50 billion by 2020-21. These observations were made by H.E. Md. Shahriar Alam, MP, State Minister, Ministry of Foreign Affairs, Government of the People’s Republic of Bangladesh, during an interactive meeting held at the World Trade Centre Mumbai on February 13, 2017.
Bangladesh has managed to keep its textiles export strong despite the withdrawal of quota restrictions. Out of the 10 LEED certified units globally in the textiles sector, seven are established in Bangladesh. Further, the textiles sector employs three million women workers of the 5 million workforce in the textiles sector. However, making man-made fiber remains a critical challenge. Bangladesh has now ventured into ship building and has a growing sector in shoes, jute and tea. Bangladesh has set an export target of $38 billion in 2017.
Referring to cooperation with India, H.E. Mr. Alam expressed that trade remains the fundamental basis of India-Bangladesh relationship and the establishment of WTC World Trade Centre Chittagong will help strengthen our trade cooperation.  H.E. Alam urged WTC Mumbai to work together with WTC Chittagong.
As many as 100 Special Economic Zones are being planned in Bangladesh of which 10 are operational, while 42 are in the pipeline. Two SEZs in the North-west of Bangladesh bordering India are dedicated to Indian businesses. The presence of Indian private sector in Bangladesh is growing and in recent years Reliance has been actively involved in the LNG sector, Adani is setting up a coal-based power plant as also Tata is expanding its manufacturing operations. Godrej is also present in Bangladesh.
H.E. Mr. Alam considers the North-East India as a potential market particularly in the sector of FMCGs. Another important area for India-Bangladesh cooperation is in the area of Blue Economy where spatial planning integrates conservation, sustainable use of living resources, oil and mineral wealth extraction, bio-prospecting, sustainable energy production and marine transport. India and Bangladesh have also signed an MOU on coastal shipping. H.E. Alam also said that there was great potential for cooperation in the fishing sector.
Earlier, in his welcome address, Mr. Vijay Kalantri, Vice Chairman, World Trade Centre Mumbai and President, All India Association of Industries said there is much that unites the two countries – a shared history and common heritage, linguistic and cultural ties, passion for music literature and the Arts. The commonality is reflected in our multi-dimensional and expanding relations. In the last more than four decades, the two countries have continued to consolidate their relations and have built a comprehensive institutional framework to promote bilateral cooperation in all areas. More than 50 bilateral institutional mechanisms are operational at present between India and Bangladesh. In 2010 India had announced a US$1 billion Line of Credit (LOC) for Bangladesh, followed by a new LOC of US $ 2 billion in 2015. The new LOC will cover projects in the areas of roads, railways, power, shipping, SEZs, health & medical care and technical education. Many Indian public sector units such as Indian Oil Corporation, Numaligarh Refinery Limited, Gas Authority of India Limited, Petronet LNG Ltd and ONGC Videsh Ltd are working with their Bangladeshi counterparts in the oil and gas sector of Bangladesh. Many private companies of India have also shown interest in the power sector of Bangladesh. Energy sector cooperation between India and Bangladesh has also seen considerable progress in the last two years.
Referring to India-Bangladesh trade Mr. Kalantri mentioned that in the last five years total trade between the two countries has grown by more than 17 percent. India’s exports to Bangladesh in 2015-16 (July-June) were US$5453 million and imports from Bangladesh were US$690 million. Substantial duty concessions have been extended to Bangladesh under SAFTA, SAPTA and APTA, Mr. Kalantri said.
Also present on the occasion were Ms. Samina Naz, Deputy High Commissioner of Bangladesh, Bangladesh Deputy High Commission in Mumbai, Mr. Sharad Upasani, Vice Chairman, World Trade Centre Mumbai, Capt. Somesh Batra, Vice Chairman, World Trade Centre Mumbai, Mr. Y. R. Warerkar, Executive Director, World Trade Centre Mumbai and Ms. Rupa Naik, Director-Projects and Executive Director, All India Association of Industries.