India’s premier lifestyle channel, NDTV Good Times is back with its fashion makeover series ‘Get The Look’ with Ambika Anand. The longest running fashion makeover show on Indian television is donning a whole new avatar this season, as it celebrates Cutting Edge Indian Style by exploring Indian fashion with a fresh perspective #GlobalIndia.

On the agenda is getting 13 youngsters who are willing to step out of their comfort zone and make wearing quintessential Indian fabrics like khadi, banarsi, chanderi, linen and cotton amongst others, a part of their style palette. Each episode will present the beauty of wearing these fabrics in a fun yet modern way. The show aims to be an honest endeavour to translate the magic and mysticism that lies within the woven thread and make it a preferred choice, be it for daily wear or for special occasions.

A power-packed team of experts like Designers Rajesh Pratap Singh, Sanjay Garg, Monica and Karishma, Gaurang Shah and Rohit Bal, Dermatalogist and Beauty expert Dr. Kiran Lohia, and Stylists like Divya Arora, Rod Anker, Majari Malik and Vidya Tikari; will get young boys and girls to make wearing contemporary Indian clothing their preferred choice. In each episode, they will analyse and style individuals to reimagine and reinvent their wardrobe and confidence level.

Speaking about the launch of the new season, Arati Singh, Channel Head, NDTV Good Times said, “We are very proud that ‘Get The Look’ over the years has set itself a benchmark for fashion and makeover shows in the country. Our aim is to inspire young Indians to be comfortable in their own skin”.

Speaking about the essence of the season ‘Get The Look’ #Global India, Ambika Anand said, “I’m very excited about this season because we’re sharing eclectic ways of wearing traditional, handloom fabrics. This season we are celebrating Indian handlooms and will be giving contemporary looks to 13 youngsters who dare to experiment.”
~Catch the all new ‘Get The Look’ with Ambika Anand only on NDTV Good Times from March 23, 2017, every Thursday at 8 PM~ 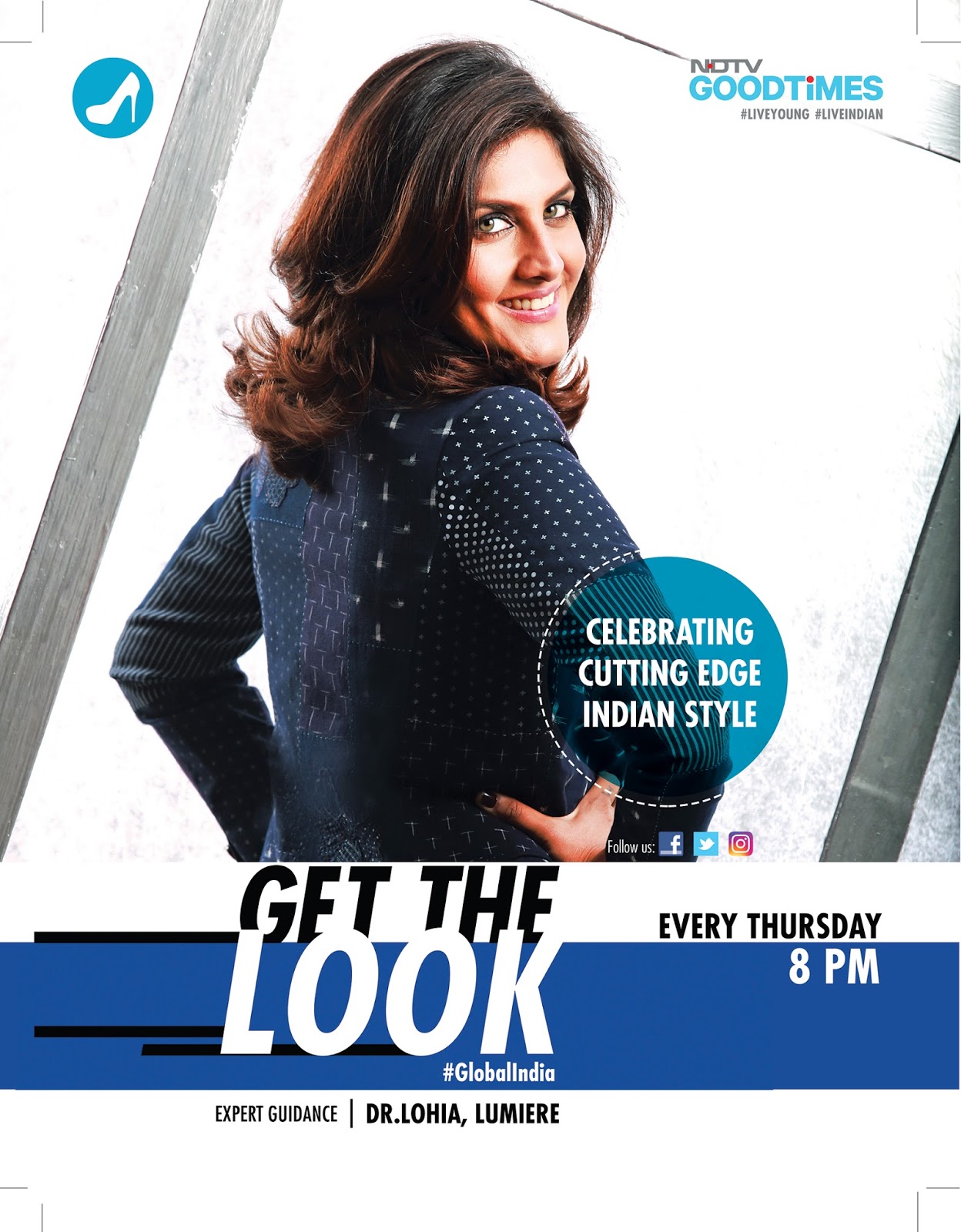 About NDTV Good Times: NDTV Good Times is the flagship channel of NDTV Lifestyle, which is a part of the NDTV Group. Launched in September 2007, it quickly became India's top-ranked English-language lifestyle television channel - rapidly drawing in its target audience of socially upbeat, well-travelled, cosmopolitan viewers who want to live in style, admire fashion, are adventurous about food and travel and want more out of every moment in life with both back-packing and high flying budgets.

NDTV Good Times presents fresh, original programming that gives its viewers mantras on how to enjoy food both highway and Michelin star, find good health through salsa and yoga, follow fashion on ramps both Indian and global and most of all on how to live life the fullest, no matter where you are. The line-up of shows covers every aspect of the lifestyle genre to portray and cater to an increasingly global India.

With the maturing lifestyle space in India at an inflection point and as pioneers in that space, NDTV Good Times has redefined the lifestyle entertainment category codes once again.

Today, India's oldest lifestyle channel is its youngest. With programming that is impulsive, interactive and with an attitude to match. The new logo, icons, indents and a vibrant and dynamic colour palette are a testament to the channel's continuing evolution as India’s premier lifestyle entertainment destination.

The channel tag-line is #LiveYoung #LiveIndian, the only socially integrated tagline in India, which integrates and recognizes social media as a part of the channel's DNA. While it exemplifies what the channel stands for, it is also a call to action, as it exhorts the NDTV Good Times' viewers to live young and live Indian.

NDTV Good Times has won several programming awards at the Indian Television Academy Awards, Indian Telly Awards & World Media Festival for key shows & interstitials like Highway on My Plate, No Big Deal and Making of the Kingfisher Calendar. Judged as the 'Best

Fashion & Lifestyle Channel' at the ITA (Indian Television Academy) Awards for two consecutive years, NDTV Good Times is beamed directly across international markets such as US, Singapore, Sri Lanka, Mauritius and Maldives. The Channel is present across all major analogue cable markets & all six DTH platforms in India.